Drinker is imprisoned for 2 years or fined

indonesia November 12, 2020 indonesia Comments Off on Drinker is imprisoned for 2 years or fined 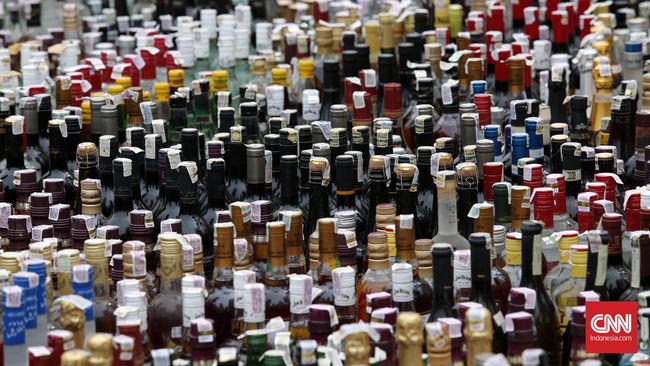 The criminal sanctions or fines are included in Article 20 Chapter VI concerning the criminal provisions of the Minol Bill.

“Anyone who consumes alcoholic beverages as referred to in Article 7 will be sentenced to imprisonment of a minimum of three months and a maximum of two years or a fine of minimum Rp. 10 million and maximum Rp. 50 million,” reads the draft regulation as downloaded from the website. DPR.

Criminal sanctions and fines for drinkers can be added if the person is believed to be disrupting public order or threatening the safety of others.

As stated in Article 21 (1), Chapter VI on the penal provisions of the Minol Bill, the prison sentence for drinking minol that disrupts public order or threatens the safety of others is increased to a maximum of five years or a maximum fine of 100 million Rp.

Even Article 21 (2) states that if the drinker of minol is proven to have killed the life of another, the penalty will be added by one third of the basic sentence.

In addition to drinkers, the Minol bill also regulates the threat of sanctions against people who produce, import, store, distribute and sell mineral oil.

Article 18 Chapter VI of the Penal Provisions of the Minol Bill states that a person who produces Minol can be sentenced to imprisonment of up to 10 years or a fine of up to Rp 1 billion.

Meanwhile, Article 19, Chapter VI of the Penal Provisions of the Minol Bill stipulates that a person who enters, stores, distributes and sells minol can receive a maximum prison sentence of 10 years or a fine of up to Rp 1 billion.

The Minol bill also regulates three classifications of minol based on the ethanol content, to be precise in Article 4, Chapter II, on classification.

Yet the community’s prohibition on producing, importing, storing, distributing, selling, and consuming mineral oil does not serve different purposes.

Article 8 (2) Chapter III on the Prohibition provides that the exception to the Minol Bill is given for the interests of customs, religious rituals, tourists, pharmacies and in places permitted by legal regulations.

In response to the Minol Act, the Institute for Criminal Justice Reform (ICJR) warned of the potential of over-criminalization that could arise if this draft regulation were passed into law.

On this basis, ICJR’s executive director, Erasmus Napitupulu, ruled that the Minol bill did not need to be discussed by the DPR.

“The approach to banning alcoholic beverages could negatively impact criminal justice in Indonesia,” Erasmus said in an ICJR release Wednesday (11/11).

After reading the bill on the ban on minol available on the DPR website, Erasmus ruled that the proposed bill would contain a ban.

Still, one of the Minol law proposers of the PPP faction, Illiza Sa’aduddin Djamal, said that the Minol law would protect the community from negative consequences and raise public awareness of the dangers of Minol.

“The bill is intended to protect the public from negative consequences, create order and peace in society by drinking alcohol,” Illiza said. CNNIndonesia.com, Wednesday (11/11).

CNNIndonesia.com has tried to confirm the truth of the Minol bill to some members of the board but has not yet received confirmation that this news has been revealed.