2 Limousin of Jokowi for Solo residents 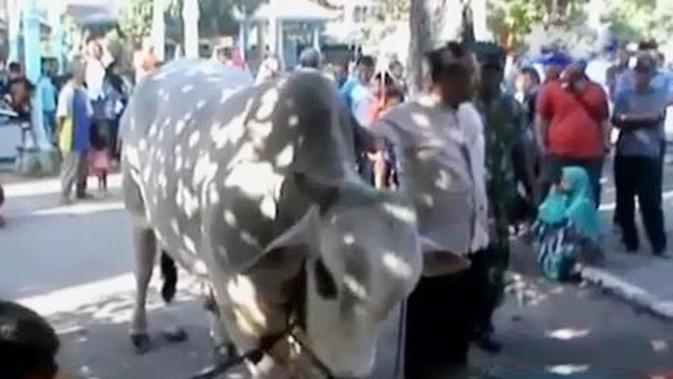 Liputan6.com, Solo – President Joko Widodo or Jokowi bought two cows as sacrifices in his hometown of Solo. Each of the two cows is donated in the Solo Grand Mosque and Al Wustho Mosque.

Chairman of the Takmir of the Grand Mosque of Solo, said Muhtarom, President Jokowi gave a sacrifice of a cow to be donated to the Great Mosque of Solo.

"Pak Jokowi bought two cows but distributed them to the Great Mosque and the Al Wustho Mangkunegaran Mosque," said Muhtarom in Solo, Tuesday (08/21/2018).

According to Muhtarom, the donated cattle were bought from farmers in the Polokarto area, Sukoharjo. In fact, the envoy of President Jokowi came directly to his breeders to view and control the condition of his cow.

"Last Tuesday, the president's envoy came to check on the condition of the cattle. There were also officers from the cattle department who also checked the cows and inspected the cows Pak Jokowi bought," said Muhtarom.

"Indeed, the cow is bigger, which is donated in the Great Mosque, I do not understand the type of cow, it is limousine or simmental," he said.

With regard to the delivery of Jokowi's donation, he claimed that he did not know when he would arrive at the Grand Mosque. At the latest, the jumbo cow will arrive in Solo at night.

"If it is not noon, the evening of the cow has arrived here, last year he also donated cows for the sacrifice," Muhtarom memungkasi.

Proud that his favorite cow weighs 1.1 tons, bought by President Jokowi for Rp 60 million. Saeman is prepared to sleep in a cowshed.