KOMPAS.com – Yohanes Andigala was still in first grade of high school, but his courage was to climb up the flagpole and solve the problem of the rope while the ceremony took place was to make a thumb.

Last year a similar action was taken by a member TNI in Rembang. Sery Suryono climbed quickly on the flagpole and corrected the hook that was released during the commemoration of the 72nd Indonesian Independence Day.

This was followed by a number of courageous actions during the flag ceremony that took place in Indonesia: 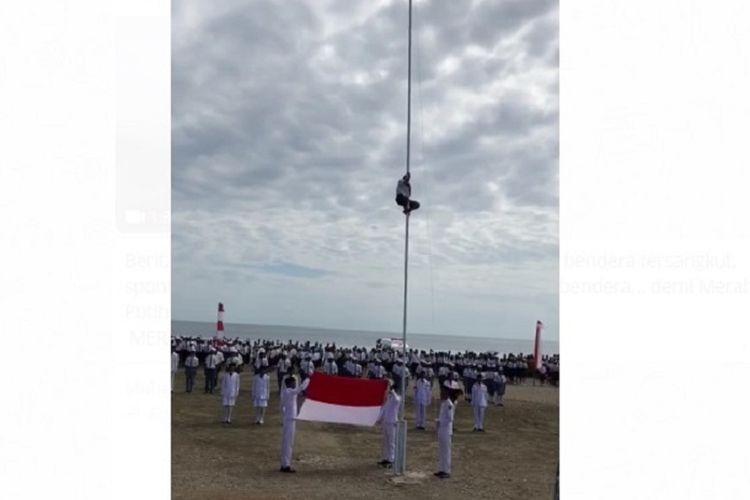 EXCELLENT Video shows the action of John in climbing a post for the proper functioning of the independence ceremony on the RI-Timor Leste border. The video was viral on social media.

The action of Yohanis Gama Marschal Lau aka Joni while climbing the flagpole was included. The video, which lasts 1 minute and 59 seconds, immediately becomes viral on social media.

In the video Joni deftly rises the flagpole after learning the flag draw is released and fixed at the end of the post.

Joni looked exhausted when he was in the middle pole. Screams from the ceremony participants asked Joni to come down. Joni, however, continued to climb up.

After the successful plucking of the hook the cheers and applause broke immediately. The ceremony can be resumed immediately until it is completed. also climbed the flagpole to pick up the flag rope that was involved during the 73rd Indonesian Independence Day Ceremony in Barepan Field, Cawas, Klaten, Friday (17-08-2018).

The action was also recorded in the video and became viral he is social. Then Serma Timbul said that her actions were based on the instinct of the soldier she had.

"My instinct as a soldier must be responsive and agile to smooth out the incident (loose flags)," Serma said. Kompas.com .

At that time, Serma Timbul served as a ceremonial officer not far from the flagpole. Pendam IV Diponegoro archive Serda Suyono (far right) Thursday (08/24/2017) was received by the head of the army general Mulyono in his office at the headquarters of the army in Cilangkap, Jakarta for a certificate of appreciation and a prize in the form of motor

The act of climbing the flagpole also took place during the ceremony of the 72nd Indonesian Independence Day in Kaliori District, Rembang, Central Java, Thursday (08/17/2017).

When the flag swatter spread the flag, the ring the upper hook was removed and went straight up to the end of the flagpole.

Suyono's attendant at the ceremony immediately climbed onto the post to lower the hook ring. Like Joni, the action was captured in the video and eventually became a viral.

After Serda Suyono had succeeded in retrieving the hook ring, the ceremony could be continued until it ended. Suyono's servant received a number of prizes, including a motorcycle.

Also read: Save the Flag Rope, Serda Suyono got a motorcycle price hand-out Serka Yonatan Duil climbs the flagpole when the flagstaff is involved in the flag-lowering ceremony of the 73rd anniversary of the independence of the Republic of Indonesia on the Marilonga football pitch in Watunggere, Detukeli District, Ende Regency, Friday (17-08-2018) at 5:00 am

The action of climbing the flagpole also took place in a flag lowering ceremony in the context of the 73rd anniversary of the proclamation of the independence of the Republic of Indonesia on the Marilonga football field at Watunggere Village, Detukeli District, Ende Regency, NTT, Friday at 17.00

When Paskibra level Detukeli sub-district performed the flag reduction, suddenly bonded the flag on the flagpole so that the flag could not be lowered.