Considered negligent, the head of the Kindled Parade Kindergarten was removed 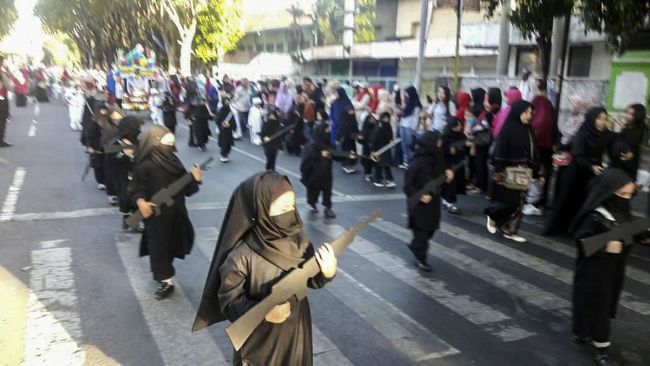 Jakarta, CNN Indonesia – Hartatik was discharged from his position as director (Kasek) TK Kartika V-69 in the city of Probolinggo because he was considered negligent after the deployment of kindergarten class students in veil suits and the wearing of replica weapons in a cultural parade.

With regard to Hartatik's next position, the letter only said that he was "assigned to the same rank at the Probolinggo City Education, Youth and Sports Office".

Barung said that his party along with the education office claimed that he had asked Hartatik about the incident.

[Gambas:Twitter]
"The results with information are in accordance with what has been conveyed, and there is essentially no intentional factor," he said.

With regard to the replacement of Hartatik as chairman of the school principal, his party still coordinates the Kartika V-69 TK Foundation.

Earlier, the city of Probolinggo, East Java, was neutralized by a student's corso for pre-school children. Because the march that was the momentum of independence was damaged by symbolizing violence with a replica of a firearm.

Suddenly this was viral on social media, protests were also made on some FB accounts. Warganet (netizens) has responded. Even youth organizations also participated in protests such as GMNI, IPNU, GP Ansor and Gusdurian Probolinggo.

According to Braung, Hartatik said that he did not intend to support these activities or to focus on certain radical groups or groups.

The use of the attributes of the participants of the hijrah or black veil parade accompanied by firearms toys is an idea or a theme of TK Kartika V-69 Probolinggo itself.

"The purpose of them reflects the struggle of Rosululloh and it is not the intention to refer to the symbols of radicalism, only to give confidence in his students," he said.