Defeating Water Crisis and MCK facilities in Lombok, this is what the government is doing

Head of the Information Data Center and Public Relations of the National Disaster Management Agency (BNPB) Sutopo Purwo Nugroho explained that the joint team continued to use various existing tools to solve the problem.

"On the basis of reports from the Ministry of Public Works, enough is being built, such as 65 public hydrant units with a capacity of 1000 liters," said Sutopo at Graha BNPB, Tuesday (08/21/2018).

"Then 252 portable toilets, 19 tankers were used, as well as assistance from several existing regional work units (SKPDs), 44 wells and groundwater pumps with a capacity of 15-25 liters," he continued.

Sutopo said that the water crisis experienced by residents of Lombok is not only caused by the earthquake disaster. 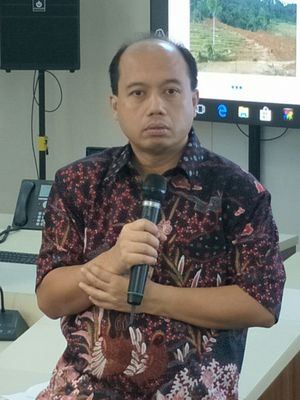 KOMPAS.com/ MOH NADLIR Head of the information and public relations center of BNPB, Sutopo Purwo Nugroho, on Friday (02/23/2018) at his office in Jakarta.

Because August and September are the highlight of drought in the Lombok and Sumbawa regions. According to Sutopo, the water availability in Lombok has failed since 1995.

Read also: Until today there are 1,005 aftershocks in Lombok

"In fact there is no disaster, even there is a water crisis," he said, and said that the earthquake disaster indeed aggravated the situation.

Sutopo explained that the incident brought refugees to new places that had no water source.

This water shortage has an impact on the sanitary system. Although there are currently 252 portable toilets, the limitations of water are new problems.

"Although there is a portable MCK built, the limited water causes odor, and then it is full, so people who suffer from diarrhea are increasing," he explained.

"That's why sanitation development and toilet construction are still being carried out," he said again.

Currently, the handling process is still carried out by a joint team, both from the local government and from the central government.

Also read: 5 Last facts of the earthquake in Lombok, 515 victims of death to loss Rp.7.7 trillion

Compass TV Since the earthquake and fire have taken place, no help has reached them.