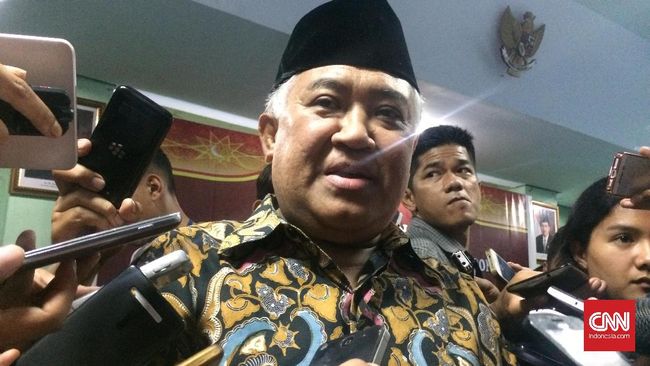 Jakarta, CNN Indonesia – Chairman of the Indonesian Ulema Council (MUI) Advisory Board Din Syamsuddin did not consider the protest against the loud volume of the loud call to prayer as a form of blasphemy.

This was transmitted by Din in response to the case that Meiliana, a resident of Tanjung Balai, North Sumatra, who had been sentenced to 1.5 years for blasphemy because of his complaints about the volume of the call to prayer, had been entangled.

"In my opinion, protesting against the loud call of Azan and disturbing the neighbors is not a blasphemy," Din said in his written statement on Sunday (8/26).

According to Din, someone's actions can be categorized as blasphemy religion if it has offended it as a religious ritual. For example, burdensome religious rituals, including a call to prayer. If it is only complaining, it is not the intention to slander religion.

"If you blame the call to prayer for a religious ritual with negative and cynical judgments, it can be considered insulting," Din said.

Furthermore, the former chairman of Muhammadiyah & # 39; s PP said that the volume or volume of the call to prayer should be addressed. Especially in the middle of a settlement where the population consists of different religions. This is to maintain mutual comfort.

In fact, according to Din, the sound of the call to prayer to be comfortable would indeed awaken the hearts of the locals.

Meiliana, a resident of Tanjung Balai, North Sumatra, was sentenced to 18 months in prison because he protested against the volume of the call to prayer in his neighborhood. He was considered someone who violated the blasphemy article.

Meiliana's lawyer, Ranto Sabrani, said his party would appeal against the 1,5-year sentence pronounced by the panel of judges. (Sur)