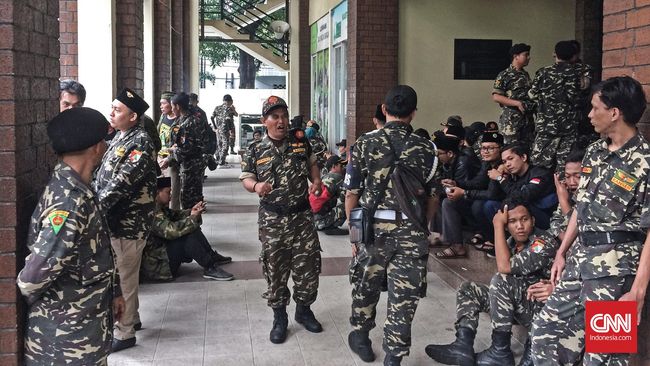 Jakarta, CNN Indonesia – Chairman of the central executive power of the Ansor Youth Movement Yaqut Cholil Qoumas or Gus Yaqut said that the organization Multipurpose Ansor Barisan (Banser) did not clash with the supporters of the # 2019 GantiPresiden statement in Surabaya, East -Java, Sunday (8/26).

He also claimed that his institution had never instructed Banser to take part in demonstrations of the wave of masses that rejected the # 2019anti presidential presidential movement, especially in Surabaya.

"Institutionally there is no instruction, but there are indeed frameworks that participate in the personal rejection of the movement. If we are private, we will release it: the frameworks of Banser and Ansor must know what is good and not for this nation. mature or not, "Gus Yaqut said in a press release CNNIndonesia.com, Sunday (8/26) evening.

Gus Yaqut added that the new Ansor and Banser would be institutionally involved after assessing the movement as a threat to the integrity of the nation and the state.

"In the meantime, we still see that only political movements of people who are frustrated or confused do not know what kind of story they will use against incumbent operators," he said.

With regard to Banser's allegations involved in the demonstration to refuse movement activist # 2019, the president who is also a candidate for Gerindra candidate, Ahmad Dhani Prasetyo, this afternoon in Surabaya, Yaqut claimed that he was the head of the national employment office had instructed to check the figures.

According to Gus Yaqut, his party would take immediate action on the basis of the findings in the field. Including whether Banser has carried out a step of insubordination.

"We will take the necessary actions later on, categorically, wait," he said.

Previously through an account Instagramhe said, this afternoon Ahmad Dhani launched a video recording of himself explaining that he could not leave the hotel to follow the # 2019GantiPresiden movement statement in Surabaya this afternoon. One of Dhani's colleagues who have been admitted to accompany him at the hotel, chatted & Idiot Banser & # 39; He pointed to the outside of the hotel and said: & # 39; This Banser, Banser. & # 39;

Meanwhile, Dhani continued to explain that he was still waiting in the hotel so that he could come out after the video was recorded. He said it was two o'clock before the crowd protested.

Moreover, Yaqut was reluctant to debate whether the # 201 movement was not a constitutional president or not and he was taken into betrayal or not.

"But I think the # 2019 presidential movement is a sissy movement. It is not clear the gender," he said.

The DPR member of the PKB faction argued that he had told the # 2019 activists to be more straightforward with their movements. The reason is, Yaqut went on, that in the 2019 presidential election it was clarified that there will be two pairs of candidates, namely the Indonesian incumbent President Joko Widodo (Jokowi) who was joined by Ma & # 39; Amin as the future vice president and Gerindra general chairman Prabowo Subianto who drew Sandiaga Uno to his vice president.

Yaqut has also increased again for the presidential election process of 2019, the General Election Commission (KPU) has determined the time allowed to open the campaign.

"And the people will be the fairest judges, it is not necessary to force themselves to become a victim of the system. playing victim"said Yaqut about the # 2019 movement of the president.