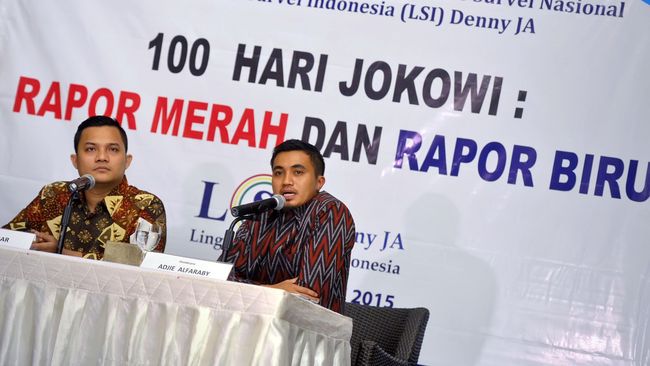 Based on the latest research by the Indonesian research group (LSI) Denny JA, the level of eligibility or freedom of choice of the Jokowi-Ma & # 39; ruf pair reached 52.2 percent.

In a survey held on August 12-August 19, 2018, Prabowo-Sandiaga received only 29.5 percent. In the meantime, 18.3 percent of the respondents kept their choices secret.

"Elektability Jokowi-Maruf has reached"Magic number"52.2 percent of this figure almost matches Jokowi's vote in the 2014 presidential election, which is 53.15 percent," said LSI researcher Denny JA, Adjie Alfaraby in the latest release at the Denny JA LSI office , Rawamangun, Jakarta, Tuesday (21/8).
The number of respondents in the survey was 1,200 respondents. The sampling method used consisted of a multi-step random sample with a proportional amount with a margin of error of 2.9 percent carried out in 33 provinces.

"This survey is not biased and is funded by the LSI Denny YES," said Adjie.

Adjie also said that the couple Jokowi-Ma & # 39; ruf took the lead in five of the six key and decisive votes in the upcoming 2019 presidential election.

At first Adji said that the Jokowi-Ma & # 39; ruf-pair was superior in the pockets of Muslim voters by winning 52.7 percent of the votes compared to the Prabowo-Sandiaga pair of 27.9 percent and not 19 percent. to choose.

"The difference between the two candidates in the Islamic voting bag reaches double digits," he said.

In addition, Jokowi-Ma & # 39; ruf also excelled in segmenting non-Muslim voters by 47.5 per cent and Prabowo-Sandiaga by Raiha. 43.6 percent and voters who have not made a choice of 8.9 percent.

"The distance is thin, this is quite important because the population of 10 percent will decide to win or lose." We learned at the 2014 presidential election and Pak Jokowi won a landslide victory in the minority, "he said.

Apart from that, the Jokowi-Ma & # 39; ruf-couple also excelled in the pockets of voters of small people & # 39; or voters with a family income of less than Rp2 million per month at 54 7 per cent. While the Prabowo-Sandiaga pair won only 25.2 percent of the votes.

"This population is the largest, because the voters in this segment reached 58.5 percent," said Adjie.

Not only that, the pair Jokowi-Maruf also excelled under the voices of & # 39; mothers & # 39; or female voters with 50.2 percent compared to the Prabowo-Sandiaga pair of 30 percent.

He said the Sandiaga Uno speech about the & # 39; Mother Party & # 39; the voters had not significantly influenced the registration at the KPU.

"In this bag, the Jokowi-Maruf voters are two figures ahead," he said.

The Jokowi-Ma & # 39; ruf pair also performed better than the Prabowo-Sandiaga pair based on the beginner mass voters or Millennial Voters & # 39; with a percentage of 50.8 percent compared to Prabowo-Sandi only 31.8 percent.

"This voter is a significant number to win a victory in the 2019 presidential election because the number reaches 44.8 percent," he said.

Nevertheless, the voice of the Prabowo-Sandiaga pair succeeded in defeating the Jokowi-Maruf pair in the segmentation of the developed voter base.

Prabowo-Sandiaga won with a percentage of 44.5 percent compared to Jokowi-Maruf, who earned 40.4 percent on the electoral basis.

"This segmentation is an influencer and they can lead to opinions, those who can lead opinions and let Jokowi lose," Adji said.

Adji then said that the Jokowi-Maruf couple in the upcoming 2019 presidential elections could excel in five of the six major sound bags.

"A score of 5-1 for the success of Jokowi-Maruf after the registration of presidential and vice presidential candidates," he concluded.