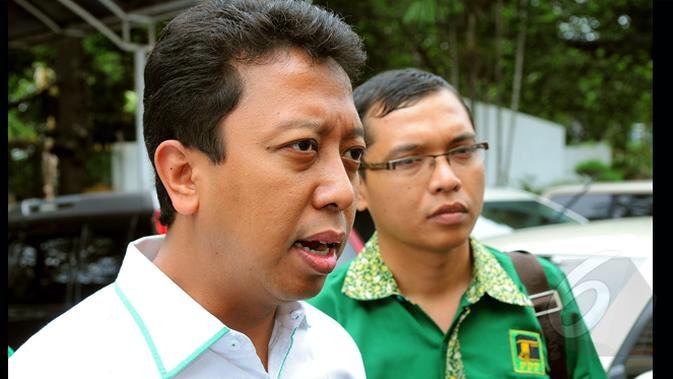 Liputan6.com, Jakarta – General Chairman of the United Development Party (PPP) M Romahurmuziy alias Romi claimed that he had received no appeal from the investigators of the Corruption Eradication Commission (KPK) about the alleged bribery case of regional financial balance funds.

"Up to now, Mas Romi has not received a summons or second summons for requests for information that is necessary," said PPP Secretary General Arsul Sani on confirmation on Wednesday (22-08-2018).

Romi will undergo a re-examination on Thursday 23 August 2018. Arsul said that representatives of the PPP would later come to the anti-cooperation institution to check whether Romi would undergo an investigation or not.

"Because if it is not planned, the researcher involved may have other activities or tasks," Arsul said.

Earlier, spokesman Febri Diansyah of KPK Romahurmuziy called for the call of the KPK, Thursday 23 August, to be fulfilled. Romi will be investigated as a witness for a suspect former official of the Ministry of Finance Yaya Purnono.

"We hope that witnesses can keep the call because they could not be there yesterday because there were other activities, so we hope that Thursday can come," said Febri.

The KPK itself investigates the alleged involvement of other parties in this case. Earlier, researchers seized Rp 1.4 billion and Toyota Camry cars. Researchers found Rp 1.4 billion when some time ago they sought the home of one of the PPP administrators in Graha Raya Bintaro, South Tangerang.

In addition to the PPP management residence, there were two other locations where the KPK was looking for. The two sites were the official residence of a member of the PAN DPR Faction Commission XI and one of the apartments in Kalibata City, allegedly inhabited by the PAN politician's expert.