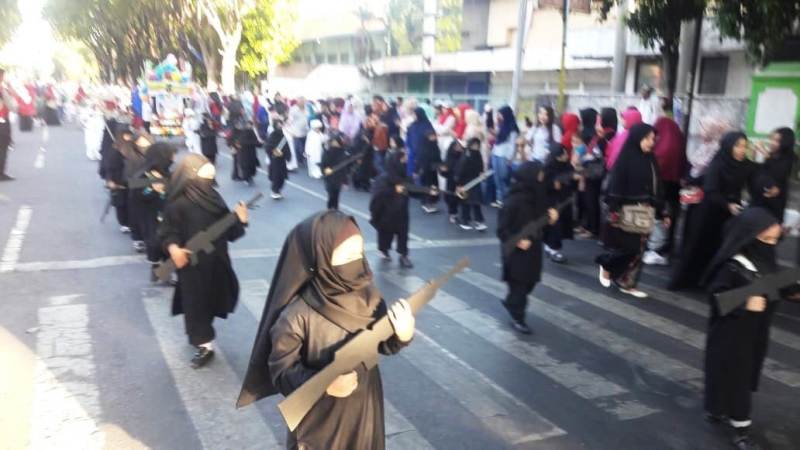 Probolinggo – The police finally stopped the viral investigation of participants in the TK carnival dressed in veils and carrying replicas of weapons. AKBP City Police Chief of Probolinggo, Alfian Nurrizal, said he had stopped the investigation because there was no violation by law.

The termination was carried out because the police had summoned all parties, both the chairman of the carnival committee and the director of the kindergarten. He also performed video searches that were first uploaded on social media.

Of the uploaded video search results, it is not intact because there are several parts that have been truncated. "We are looking for the uploads and then we try to see it, check it, it turns out it's a lot, so it turns out you know that the truth is that which is intact," he continued.

Alfian added that the pupils of the kindergarten also actually wore the red and white flag characteristics that were brought up by the children. "A red and white flag has been lifted, worn by children, so the woman wearing the veil uses the veil of the story of the king's guard, so," Alfian explained.

TK Kartika V of Probolinggo City as the party wearing the controversial carnival costume, had apologized to the public through the headmaster.

"We apologize because the use of these attributes reflects the Prophet's struggle, and it is not the intention to point to the symbols of radicalism," said the director of TK Kartika V, Hartatik.

Previously, the TK Kartika V Kota Probolinggo costume during the 73rd commemoration of the anniversary of the Republic of Indonesia on Saturday morning 18 August 2018 led to controversy because of wearing black Islamic clothing complete with hijab, veils and carrying replicas of weapons and swords. Some people think that the costume leads to radicalism.