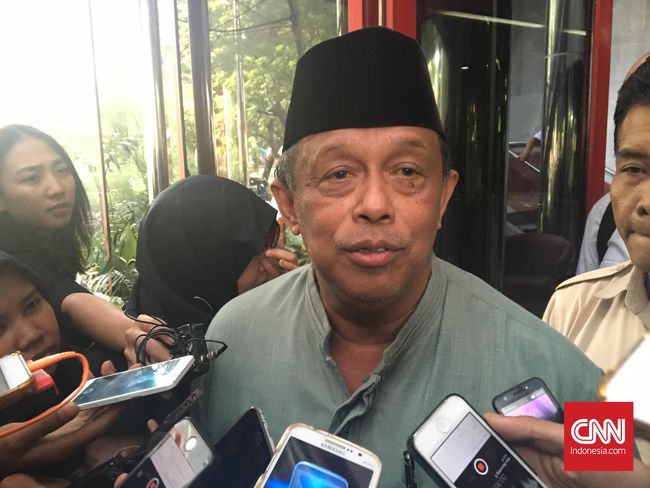 Jakarta, CNN Indonesia – National mandate party (PAN) claimed to have reported on the appointment of the Vice-Chairman of the Board of Directors of Gerindra, Djoko Santoso, the chairman of the team for winning the pair of candidates for president and vice president Prabowo Subianto–Sandiaga Uno,

In addition to PAN, the appointment of the former TNI commander was also transferred to the Prosperous Justice Party (PKS) and the Democratic Party, as bearers of the Prabowo-Sandi.

"For us as long as it is indicated by the candidate-couple and approved by all friends of the party coalition, we do not mind at all," said PAN-secretary-general Eddy Soeparno at the PAN DPP Office, Jakarta, Wednesday (8/22 ).

Eddy stated that one of the roles of Djoko Santoso, who had experience as a member of the military (AD), was to collect electoral votes at the 2019 presidential election.
"So that's where one of the important roles of Pak Djoko Santoso as a figure who held an important position in the TNI," he said.

Not only does he have experience as a military official, Eddy said, the retired four-star general also has close and emotional communication with Prabowo and Sandi. According to Eddy, the proximity is one of the important capitals of Djoko Santoso.

"So that we feel that the appointment (Djoko Santoso as chairman of the winning team) is correct," he said.

Eddy also said that the Prabowo-Sandi Winning Team would involve a number of figures, not just political parties. However, Eddy claimed that he could not transfer the names that would be included in the members of the Prabowo password-winning team.

"There are figures from the profession, activists, experts in different economic, social, political areas, but I can not name it." We think we should have extensive resources with different backgrounds, "he said.

According to Eddy, the coalition partners are currently finalizing the structure and names that have been included in the Prabowo-Sandi Winning Team. He said in due course that it would announce the names of the winning team members and register at the same time with the General Election Committee (KPU).

"We have a fairly long time, now we discuss the structure in more detail and when we submit it, we hope it will not be changed," he said.

Eddy added that all coalition parties had also agreed to move legislative candidates in each region to win the Prabowo-Sandi pair.

In addition, Eddy, regional leaders of coalition parties must also be responsible for winning the Prabowo-Sandi.

"Our regional leaders are certainly not reluctant to move the party network in the region to win our prospective pairs," he said.