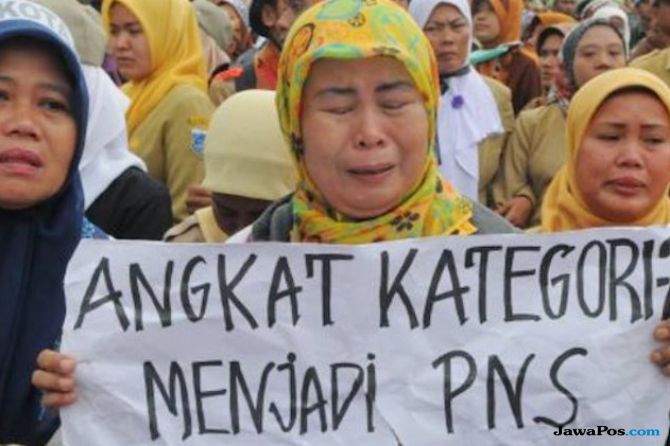 JawaPos.com – Study on the determination of the formation of 2018 civil servants (CPNS) is still being discussed. The reason is that the government is still considering the existence of K2 honorary staff (category two) before the announcement of the planned registration schedule next week.

MP X, Ferdiansyah, said the most recent data collection on the number of honorary K2 workers reached 353,580 people. That is, if they are all appointed, the state needs a budget of Rp. 37 trillion per year for their salaries and benefits.

Meanwhile, he continued with the Golkar politician, of the 353 thousands of honorary K2 workers, who met the criteria for registration of CPNS in accordance with Law 5/2014 on State Civil Apparatus (ASN) only 13,347 people.

"These criteria, such as the age of under 35 years and a minimum of an undergraduate degree for applicants for teacher training," he explained.

Ferdiansyah said that if the government can accommodate the appointment of 13 thousand temporary workers who meet these criteria, a new budget of Rp 1.1 trillion per year is needed for salaries and benefits.

In the meantime Minister of Education and Culture (Mendikbud) Muhadjir Effendy declared that he had already received the green light from the Minister of RB with regard to the proposed appointment of 100,000 new teachers.

"Alhamdulillah, we spoke to the Vice President," said Muhadjir.

Moreover, according to Muhadjir, the determination of the proportion of teachers designated from teachers of both worship and CPNS on the general lane is not their authority. The CPNS selection process for teachers remains fully the authority of Kemenpan RB.

The Ministry of Education and Culture (Kemendikbud) will only submit the criteria if necessary.

"So 100 thousand do not have to be of all honorary parties, although the honorarium still has priority to participate in the selection," said the former Chancellor of the University of Muhammadiyah Malang.

It is known, currently there are at least 736 thousand new PNS teachers. The need is to replace retired teachers and placement in new schools. Some are placed in special locations in schools.

"The increase is implemented each year in phases from this year with a substantial quota after several years of the moratorium on the appointment of PNS teachers," he concluded.