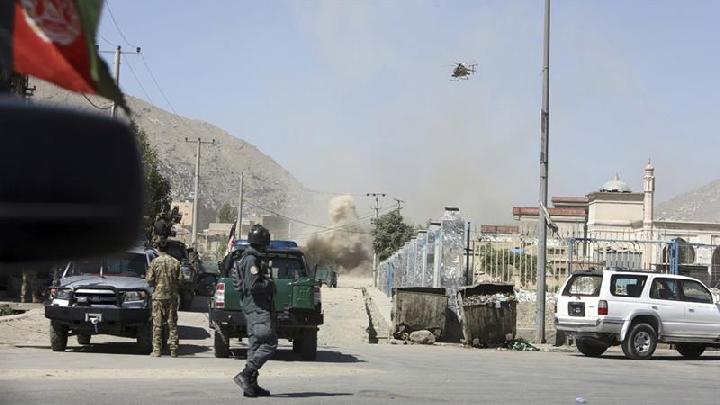 TEMPO.CO, Jakarta – The Presidential Palace of Afghanistan in Kabul was bombed by barrage rockets and a barrage of gunfire from helicopters two days after President Ashraf Ghani had offered a ceasefire to the Taliban in honor of Eid al-Adha.

According to the Aljazeera report, August 21, 2018, a NATO official for the Supporting Resolution mission in Afghanistan said 9 people were attacking by launching about 30 barrage missiles from two different places in Kabul.

The sound of a rocket was heard when President Ghani's speech about offering a ceasefire was immediately reported.

Ghani, who was aware of barrage missiles and a barrage of gunfire gunshots, said: "If they thought that rocket attacks would prevent Afghanistan from falling, they were wrong."

It is not clear who is the perpetrator of the attack on the area most heavily guarded by Afghan security forces. In this area there are also a number of embassy buildings that are very well guarded.

The police accused the Taliban of being the culprit, but ISIS later announced barrack missile encounters in the Afghan presidential palace by its militias. The Taliban themselves have chosen to remain silent.

"In total, 4 of the 9 rebels were killed and five other rebels surrendered to Afghan officials," said Lieutenant Colonel Martin O "Donnell, spokesman for the security forces of the United States and Afghanistan.

On Sunday, Ghani offered the Taliban an armistice to welcome Eid al-Adha on condition that a cease-fire would last 3 months or commemorate the birth of the Prophet Muhammad on November 21st.

Reading: 9 terrorists from ISIS and the Taliban in Afghanistan Early 2018

Ghani surrendered the cease-fire offer during the 99th Afghan Independence Day in the iconic Darul Aman Palace in Kabul.

The cease-fire for three months, according to President Ghani, was reached after widespread discussions with various sections of the Afghan community and a number of Muslim scholars.

The Taliban have not officially responded to the offer of a ceasefire by President Ghani. However, the Taliban issued a statement that the militia group planned to release hundreds of prisoners during the celebration of Eid al-Adha.