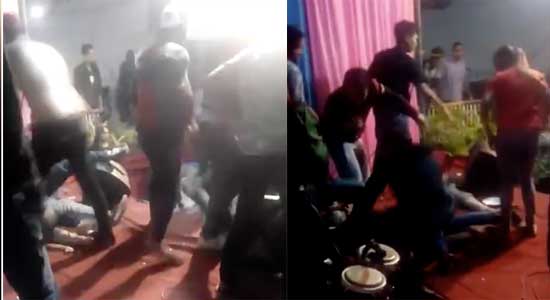 The rioters in the video turned out not to be ex-lovers and friends. The perpetrators were the young men who attended the wedding of Fachrudin Hamzah and Amira Adelia.

The incident took place around 10:30 at the groom's house.

"It is true that there was a stir at the wedding of my son, Fachrudin Hamzah, the incident happened on Thursday," said Fachrudin's father, Nuhadi, as quoted by Surya Malang.

Nuhadi said the chaos began with the arrival of Bayu and Pram at the wedding of his son. When they walk together, they fall down the stairs.

"At that time they just laughed aloud, but a friend who was far away from where they had fallen thought that if they both fell because they were encouraged by invited guests," Nurhadi explained.

The friend immediately threw water at the person with his friend who fell. The person who was hit by the throw-in reacted so that commotion arose.

"So it's not true that there was a commotion because of an ex-boyfriend who did not accept it, that's a big mistake," he said.

The chaos allowed the guests to spread hysterically and scream. The situation shocked the groom and fainted on the spot.

"He probably fainted because he saw chaotic conditions.When he was awake, Hamzah was possessed and screamed.Minds in the house become hysterical and anxious," he said.

Chaos can be solved in a family. The incident was not reported to the police.

Meanwhile, the head of the Criminal Investigation Unit of the Batu police, AKP Anton Widodo, said that his party immediately mobilized members to the site when they heard the incident.

"We have just discovered the network today, I have sent the officer to the location, because riots occur due to misunderstandings," ucao AKP Anton Widodo.

Previously, a video titled "wedding party by the ex" was uploaded by Eris Riswandi viral Facebook account on social media. The video is shared thousands of times.

"The incident was in Bumiaji, Batu, Malang, saying that his bride was fainting to see his wedding party at the end of the ex-girlfriend who had come to bring his friend with a villainous face," Eris wrote.

"What is more disturbing is that the stage and chairs have people, all things are rented out, if it is damaged, the bride has to change, bad," he concluded.