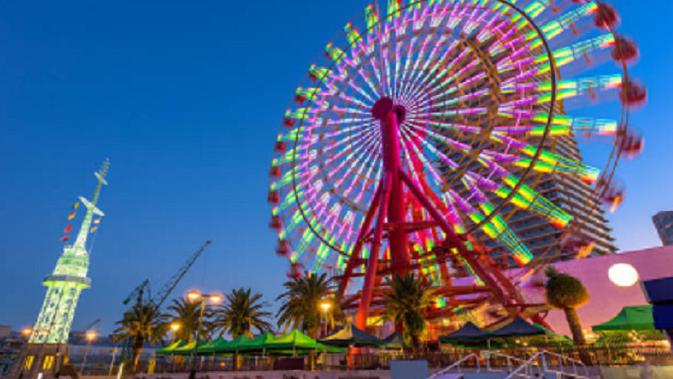 Liputan6.com, Semarang – A woman fell from a vehicle that was mounted on the Central 2018 Central Java arena, PRPP Semarang City, Saturday, September 1, 2018. The victim named Puspaningrum was immediately taken to Columbia Hospital for treatment.

According to Cahyo Nugroho, one of the visitors, the incident started when the victim was about to ride on the Ferris wheel. When steps are not perfect, the victim has reportedly slipped.

Cahyo visited Central Java with his family. When he saw the excitement, he immediately took his son away from the crowd. He worries that his child is traumatized.

"What was clear to me was that he could faint. The old one did not move until I left," he said.

According to the Jateng Fair Public Relation, Sinta Pramucitra said that when the incident occurred, the gondola was lowered one by one because the rotation of the Ferris wheel had ended its duration. All passengers prepare.

"However, the victim has not completely fallen yet, the Ferris wheel has started to lower the next passenger, so the victim is hit by a door that has not been closed," Sinta said.

When the victim falls, his friend falls too. Fortunately, the friend of the victim fell into the gondola.

As a result of the fall, the thighs and the waist of Puspaningrum were injured. He was immediately taken to the hospital of Asian Columbia for treatment.

Actually the doctor advised the victim to go home, but the manager of Central Java Fair asked Puspaningrum to rest in the hospital to check if everything was okay after he had fallen from the Ferris wheel.

"The financing of the treatment is fully supported by the manager of Central Java Fair. Every visitor is also directly insured by PT PRPP when buying tickets," Sinta said.