israel November 12, 2020 israel Comments Off on The Navy takes over the helm of Germany’s first new warship to guard gas platforms 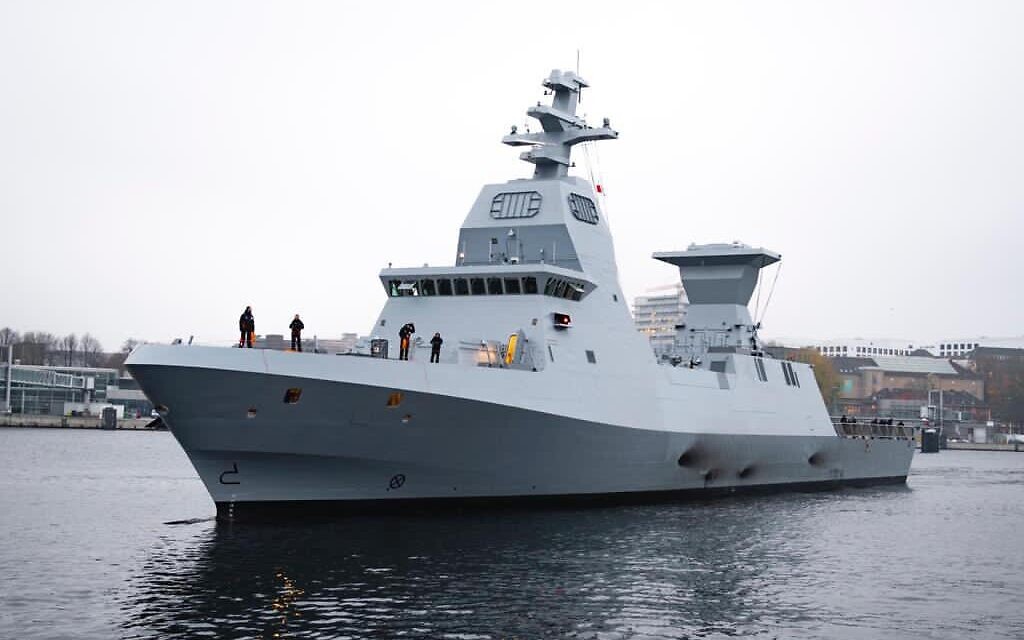 The Israeli Navy on Wednesday received the first of four new Sa’ar 6-class corvettes from Germany – the first new missile ships in more than a quarter of a century – that will be used to defend Israel’s natural gas platforms and shipping routes.

The ship, the INS Magen, will reach the Israeli coast next month, where it will be equipped with sensors, weapons and communication systems before it is declared operational.

“The INS Magen, the first of four new Magen series ships for the Israeli fleet, will respond in the best possible way to future challenges on the naval front,” said Israeli Navy Commander Major General Eli Sharvit at the official hand-during ceremony in Germany.

“The INS Magen will be armed with the best offensive and defense systems, with combat systems at the forefront of international military technology, the vast majority of which are products of Israeli industries,” said Sharvit. 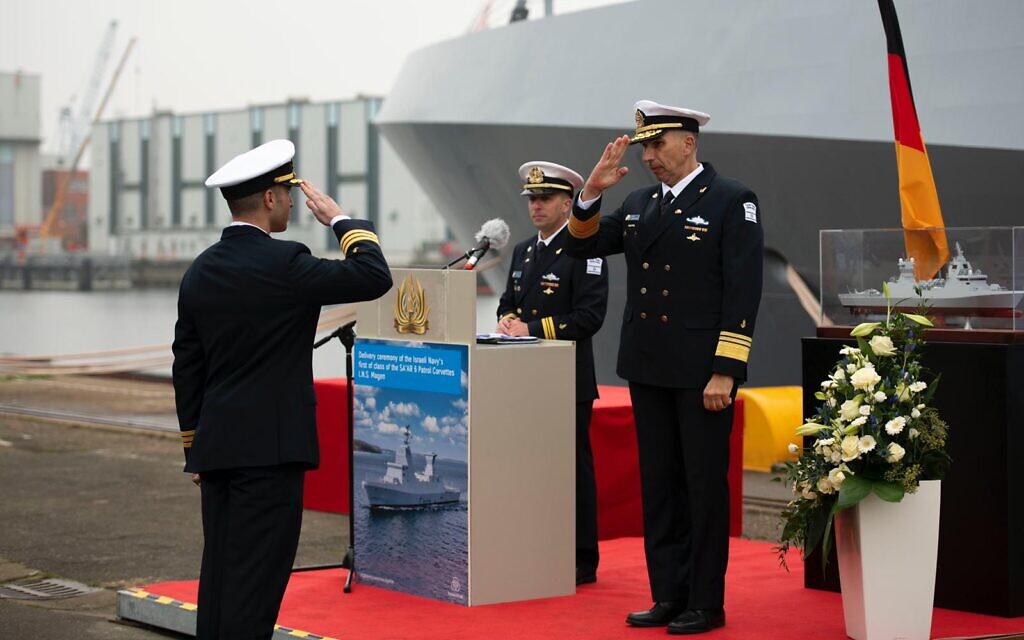 The remaining three ships will be delivered to Israel next year.

The Sa’ar 6-class ships are being built by the German production conglomerate Thyssenkrupp in the port of Kiel. The INS Magen was originally scheduled to be handed over to the Israeli Navy earlier this year, but this was delayed due to manufacturing issues caused by the coronavirus pandemic.

The ceremony was chaired by Sharvit and deputy director general of the Department of Defense Avi Dadon, as well as a number of other senior defense officials, the military said.

The INS Magen was the first new missile ship to be received by the Israeli Navy
in 26 years, since the Sa’ar 5-class INS Hanit was delivered in 1994. 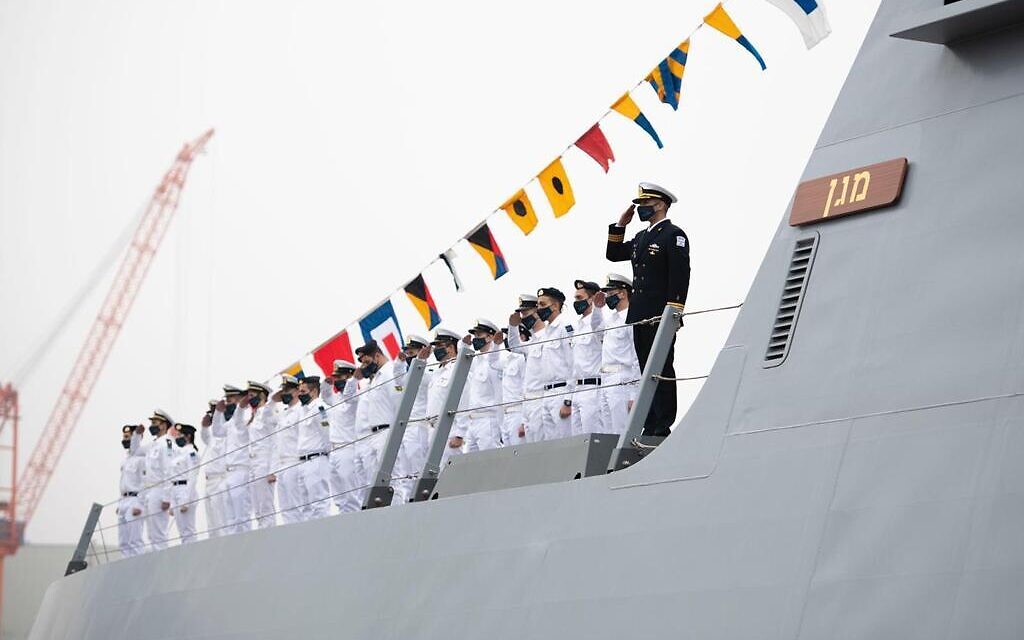 Israeli sailors aboard the Sa’ar 6-class corvette INS Magen salute as the ship is handed over to the Israeli Navy at a ceremony in Germany on November 11, 2020. (Israel Defense Forces)

The four Sa’ar 6 ships were ordered after the government charged the Navy to defend oil rigs built on natural gas deposits in Israel’s territorial waters.

Each missile ship weighing nearly 2,000 tons is equipped with two Iron Dome interceptor launchers – known as the Naval Dome – to intercept missiles and a Barak-8 battery to shoot cruise and ballistic missiles.

The ships are also covered with some 260 static radar arrays – known as a phased array – that allow them to detect incoming projectiles and airplanes in the sky, as well as ships and low-flying cruise missiles at sea level. In the past, a ship needed two separate radar systems, one to detect objects at sea level and one to scan the sky. The fact that the approximately 260 arrays remain in place also means that the ship is less detectable than ships with rotating radar systems.

The Sa’ar 6 is large compared to the country’s existing ships, but Navy officials say it is much smaller than the types of ships that carry out the types of missions it is tasked with. And while it has a helicopter landing pad on its back, it is larger than the other two classes of Israeli Navy corvettes, the Sa’ar 5 and Sa’ar 4.5, it turns out to be much smaller on the radar, thanks to advancements. in stealth technology. over the decades.

Unlike its predecessors, the Sa’ar 6 is also specifically built to accommodate both male and female sailors. The Navy expects about a quarter of the missile ships’ crews to be women. 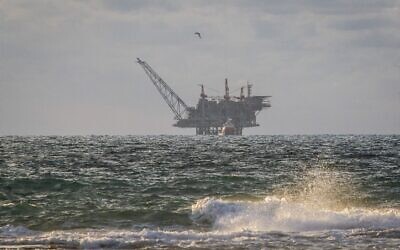 The Navy sees the protection of natural gas platforms as one of its highest priorities, believing that a direct attack on an operational extraction platform would be catastrophic. Defending Israel’s Mediterranean shipping lanes, which are used to import more than 90 percent of the country’s goods, is also seen as a major task.

The Lebanese Hezbollah terror group has identified Israel’s national gas platforms as a potential target, releasing a video in 2018 showing the Leviathan platform in firearms and threatening to destroy them “within hours”.

The threat from Hamas in the Gaza Strip, which fired a missile at the Israeli Tamar gas extraction platform during the 2014 Gaza war, is considered far less. The terror group would not have advanced ammunition capable of accurately hitting a platform at sea. According to calculations by the Israeli Navy, Hamas would have to fire about 10,000 simple, unguided missiles at a gas platform to ensure one successful attack, making such an attack technically not impossible, but highly unlikely.

The decision to purchase the Sa’ar 6 ships from the German industrial company Thyssenkrupp, along with another deal with the company to purchase submarines, is part of an investigation into graft in Israel involving several prominent Israeli businessmen, including close contacts with Prime Minister Benjamin Netanyahu. , as well as a former Navy Commander, Eli Marom.

Netanyahu, who has been indicted on three other corruption allegations, was not named as a suspect in that scandal – dubbed Case 3000 – and no current Israeli naval officials are associated with it either.

The Israeli Navy declined to comment on the specific way in which the tender to Thyssenkrupp or other matters related to the purchase process was done, but claims that the Sa’ar 6 itself was a necessary ship to purchase and that decisions on the specifications were made taken. solely for operational reasons.

We are very glad that you have read it X Times of Israel articles in the past month.

So now we have a request. Unlike other news channels, we have not set up a paywall. But because the journalism we do is precious, we invite readers for whom The Times of Israel has become important to support our work by participating The Times of Israel Community.