Weight Loss Diet: Adding pistachios to your breakfast can help you burn fat and lose weight

israel November 28, 2020 israel Comments Off on Weight Loss Diet: Adding pistachios to your breakfast can help you burn fat and lose weight 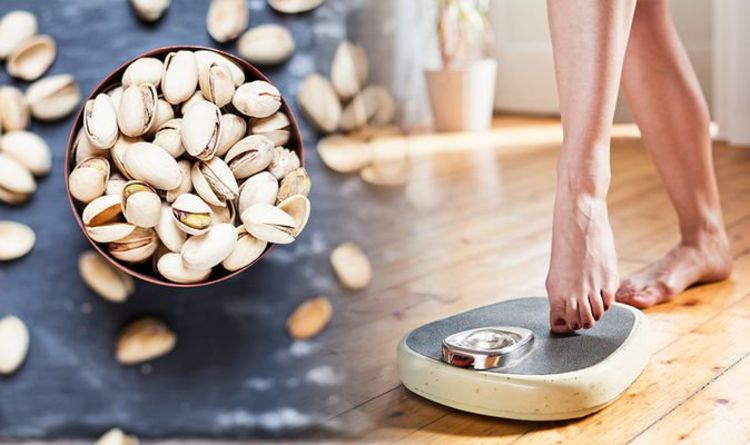 You can work towards weight loss goals as soon as you wake up. Eating the right breakfast is the best way to kickstart a day of healthy eating. It’s important to make sure you avoid faux pas for breakfast and start burning fat from scratch.

A pistachio has about three calories – compared to almonds which have about 14 calories each.

They are high in lutein, minerals and B vitamins – perfect for a nutritious start to the day.

Pistachios are also packed with fiber that will keep you feeling full for longer.

Plus, they have been proven to burn fat, according to a study published in the journal Nutrition.

In the study, a group added pistachios to their diet; they ate 20 percent of their total calories from the nut, getting more protein and fat and fewer carbs (their diet contained 51 percent carbohydrates, 20 percent protein, and 29 percent fat).

The control group, who did not eat pistachios, ate a diet consisting of 60 percent carbohydrates, 15 percent protein and 25 percent fat.

After six months, the participants in the pistachio group had smaller waists (about 0.7 inches).

They also saw their total cholesterol score drop by 15 points. They had better blood sugar levels and less harmful inflammation.

What’s more, a 2015 study in the Journal of the American Heart Association also found that people who snack on nuts may have less belly fat than those who consume carbohydrate-based foods.

So while nuts – and pistachios in particular – are a great addition to breakfast (although you shouldn’t eat more than one to two handfuls a day), what aren’t good foods to consume in the morning?

Muesli and breakfast bars should be eaten with caution.

They can be full of sugar and you could eat as many calories as if you were eating dessert.

Egg sandwiches also come with a caveat. These often consist of a fried egg, ham and cheese on a toasted bagel or English muffin.

While such sarnies are only 300-400 calories, their macronutrients are very unbalanced.

According to Livestrong, egg sandwiches contain up to four times the amount of low-quality carbohydrates as protein. This is because they are made with only one egg and are therefore low in protein, which can lead to you snacking later in the day.

Other foods to avoid for breakfast include waffles, pancakes, bagels, and muffins. These also do not contain enough protein and are rich in carbohydrates.

Orange juice is also a bad option for those looking to lose weight.

The fruit juice is packed with sugar and, if bought in a box, is low in nutritional value.