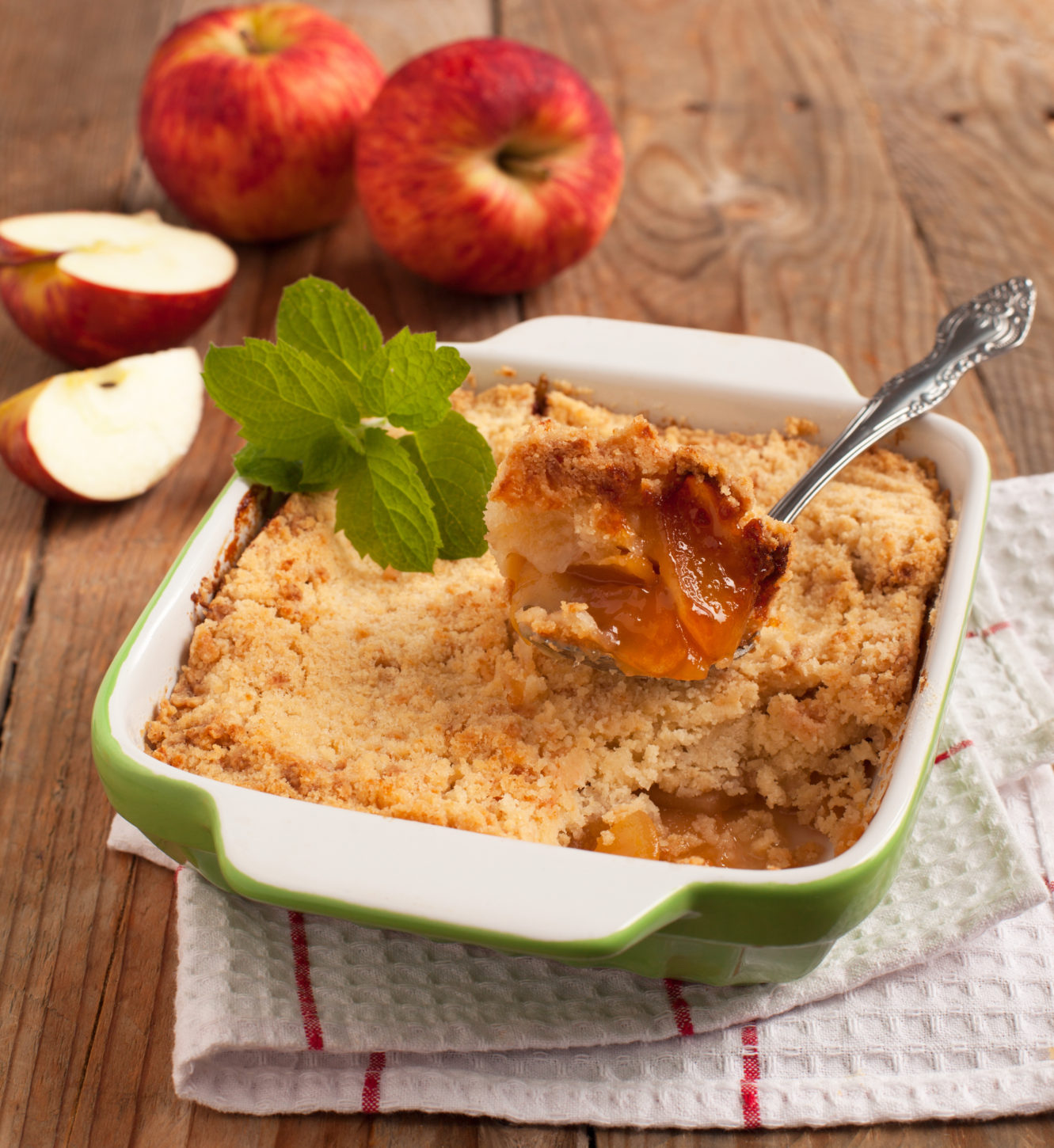 When I was growing up, it was considered elegant to buy desserts at bakeries.

Every Rosh Hashanah, my grandmother, arrived with a pile of white boxes fastened with thin red and white rope. Inside I found leaf cookies dipped in dark chocolate, éclairs, brownies and a chocolate cake with mocha glaze. My family was ecstatic about chocolate.

After an age-old Jewish custom, our Rosh Hashana dinners started to dip apple slices into a crystal bowl of honey. "For a sweet new year," my father always explained. "Let's hope that combining two sweet things together will bring prosperity and peace."

Within seconds, our Rosh Hashanah apple experience was over. At dessert we had forgotten the connection between apples and a sweet new year, because we surrendered to chocolate from a French patisserie.

But as an adult, I realized that apples could be baked in Rosh Hashanah desserts, which underlined their nectar and optimism for the coming year. I searched for dessert recipes in which exuberant apples were called. Removing dairy products, I have made pareve and still delicate cakes. Eventually I started baking for Rosh Hashanah with my granddaughters.

Like apples and round challahs, everything comes around in Rosh Hashanah. I miss my grandmother and the chocolate desserts she has given. But now that I am a grandmother myself, I pass on a different kind of memory – a collection of apple recipes that have become part of our New Year's tradition.

Use all baked apples for these recipes, such as Gala, Cortland, Fuji or Macoun.

Peel the apples and cut into pieces. Sprinkle the slices with lemon juice and mix to coat them.

In a large pot, preferably non-stick, you place the apples, margarine and the remaining ingredients for filling the apple. Cover the pot with a lid. Let the mixture slowly simmer on a low heat. Let it simmer for 20 minutes, stirring occasionally, until the apples wither and there is a thick sauce. Cool to heat with the pot covered.

Preheat your oven to 350 degrees. Coat a 9-by-13-inch baking pan, such as Pyrex, with non-stick spray. Cut the margarine into 12 pieces and sprinkle in the prepared baking tin. Place the pan in the oven and melt the margarine completely. Remove the pan from the oven when the margarine is melted.

Meanwhile, use an electric mixer at low speed, mix the flour, sugar, orange juice and vanilla until combined. The dough will be thick. Divide the dough into two parts – one third and two thirds. Using a spoon, scoop three quarters of the batter over the melted margarine as evenly as possible. The margarine is crushed under the batter, which does not completely cover the margarine.

Place the apple mixture as evenly as possible over the dough. With a spoon, sprinkle the remaining one third of the dough over the apples.

Bake for 55 minutes or until the top is golden brown. Serve immediately.

The recipe can be made two days in advance, covered with plastic film and cooled. Bring it to room temperature and put it in a 350 degree oven for a few minutes until it has warmed up.

Peel, core and slice the apples. Rinse the raspberries under cold water and let them drain on paper towels. To reserve.

Spray a 7-by-11-inch baking pan, such as Pyrex, with non-stick spray. Preheat your oven to 350 degrees.

Cut the margarine into 12 slices. Place it in a large mixing bowl and add the sugar. With an electric mixer, cream the margarine and sugar for 1-2 minutes. The consistency looks like cottage cheese. Add the egg and lemon zest and whisk until creamy.

Move the batter to the prepared pan. Divide the dough evenly.

Cook the margarine and sugar in a small bowl with a fork. Add the remaining ingredients and continue mixing and mixing until all ingredients are combined. Spoon the crumb over the apples and raspberries as evenly as possible.

Bake for 50 minutes or until a cake tester or toothpick comes in the middle clean. Cool to heat before serving.

Coat a 9-by-13-inch baking pan, such as Pyrex, with non-stick spray. Preheat your oven to 350 degrees.

Peel, core and cut the apples to measure 4 cups. Then chop the slices roughly into pieces. Move them to a large bowl. Gradually add the sugar, take two spoons and throw the apples and sugar until the apples are covered with sugar and the two are completely combined. To reserve.

In a second bowl, with a clean spoon, mix the flour, baking powder, salt, cinnamon, allspice and ginger. To reserve.

Place eggs, oil, vanilla and orange zest in a large mixing bowl (a third dish). With an electric mixer, beat the ingredients until they are well combined. Add the flour mixture alternately with the apples. Turn the mixer on and off, beat until everything is well combined. Add the pecans and turn to a low setting until you have mixed them.

Move the batter with a spatula to the prepared pan. Bake for 45 minutes, or until a toothpick or cake tester comes in the middle of the cake, it comes out clean. Cool to room temperature before cutting the cake.

Lubricate a 9-inch spring mold with non-stick spray. Preheat your oven to 350 degrees.

Peel, cut and cut the apples thinly. Sprinkle a few drops of lemon juice on each apple as you cut it. Throw the apple slices to coat. To reserve.

In a large mixing bowl, beat the eggs and the orange juice together until they are frothy. Add the sugar and salt, beating until combined. Add the flour, half each time, scrape the bowl with a spatula after each addition. Add the vanilla and beat briefly again until combined.

Use a wooden or silicone spoon to fold the apples into the dough. Mix until the slices are completely covered and evenly distributed throughout the batter. Go to the prepared spring form. Divide the dough evenly in the pan.

Bake for 45 minutes or until a cake tester stuck in the middle is clean. Torte will be golden brown on top. Cool completely before releasing the spring form and cutting the cake into slices.