Flat Tax, rate at 15%, but with "stakes" for the fake self-employed

italy September 30, 2018 Business, italy Comments Off on Flat Tax, rate at 15%, but with "stakes" for the fake self-employed 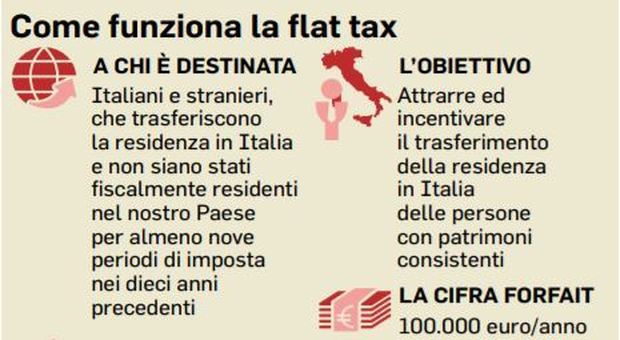 "A favorable minimum regime does not mean to close". The Deputy Minister of Economy, Massimo Garavaglia, summarizes the significance of the flat tax in favor of the self-employed who are ready to be admitted to the maneuver. With little money available, fiscal policy on the Irpef front had to slow down and concentrate on a category that is very close to the Lega. The operation is precisely aimed at broadening the target group of recipients of the lump sum scheme, which now affects about 900 thousand people, bringing them to 1.5 million. The idea is to insure the withdrawal of 15% (which absorbs VAT, IRPEF and IRAP) for all income under 65 thousand euros against the current ceilings of 30 thousand and 50 thousand euros. The hypothesis of a second 20% rate for additional incomes of up to 100 thousand euros for which the green light from the EU is available remains stand-by.

THE ESTIMATES
According to the simulations in the Treasury, with the new rules that come into effect as soon as the maneuver is launched, up to 50 thousand euros in income is paid, 5 thousand euros less tax. An amount of 7500 euros to 75 thousand euros turnover and that is 18 thousand euros for those who pay 100 thousand euros in a year. The executive will include some bets in the provision to prevent those who do not have expenses from being rewarded, including the "autonomous bogus" that uses the customer's resources and workplace. It should be recalled that the Renzi government had outlined a flat-rate system in 2016 for professionals who receive an annual salary of up to € 30,000 and at the same time support modest costs for employees (maximum € 5 thousand) and limited physical capital (less than 20%). thousand euros as of 31 December of the previous year), instead of IRPEF and the associated regional and municipal add-ons, the application of a 5 percent replacement tax for the first 5 years of activity and 15% for the following years. These rates apply to taxable amounts determined on a flat-rate basis in 78 percent of the compensation received during the year. Moreover, in contrast to the normal regime, neither VAT nor IRAP is due. The lump sum, combined with blocking the percentages of 25% premiums, makes the VAT rate handy in the first 5 years, especially for the benefit of young people and start-ups. As far as the Ipef is concerned, everything is still waiting for more favorable times. In Def, however, reference is made to the will, for individuals, to change from the current five rates to three rates and then to two from 2021. Last update: 11:38 © RESERVED REPRODUCTION