Signorini announces that the GF will continue until February, the VIPs are thinking about a joke: so no

italy November 24, 2020 italy Comments Off on Signorini announces that the GF will continue until February, the VIPs are thinking about a joke: so no 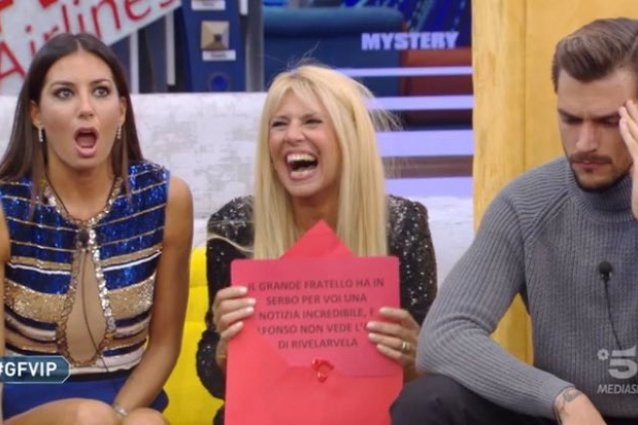 During the episode of the Big Brother Vip 2020, broadcast on Monday, November 23, participants have finally learned that the reality show ends in early February. They even had the opportunity to open the dreaded red envelope. In the last episode, Alfonso Signorini had expressed concern about the reaction the Vippos might have. Here’s how things went live. Before reading the announcement, Alfonso Signorini makes a premise: “It’s all in that envelope. VIPs expect to be out in a few weeks. Tonight they will notice the GF getting longer by more than two months. I don’t know how it will go, I’ll find out with you“In addition, from this week the GF will only be broadcast on Mondays.

The reactions of the participants of Big Brother Vip 2020

Before reading the red envelope, the participants are called to the super-led room for the big announcement. Before the official announcement, there is a video for the VIPs that summarizes their journey in the House so far. The VIPs seem moved, not all of them: Tommaso Zorzi seems to have smelled that not everything is over. Returning to the house, the competitors basically dusted off the network’s famous slogan: “Emily is on the wayFrancesco Oppini asks Signorini:The sugar has arrived, what’s missing?Signorini explains: “I wanted to make it clear to you that you have managed to reach the hearts of millions of Italians. You will have understood that Big Brother Vip will not end when we predicted, because the public loves this program. But before I get into the details and open the mysterious red envelope, let me show you the faces of those who cheer you on.The video shows the loved ones of the VIPs advising them to proceed. There are Guenda Goria for Maria Teresa Ruta, Rosalinda her sister and parents, Balotelli for Enock, Pierpaolo’s parents, Tommaso Zorzi’s mother, Alba Parietti for Francesco. Oppini,

Nathan to mother Elisabetta Gregoraci: “Go ahead, it is going well”

For Elisabetta Gregoraci there is one message, that of Nathan Falco: “Hello mommy, I am in Dubai with daddy. Today we went to the desert. I heard that the girlfriend is still preparing for a while. I’m fine, I’ll see you on TV and you can carry on “. Elizabeth dissolves in tears.

The contents of the red envelope

Alfonso Signorini explains to VIPs that they can choose what they want without obligation. The moment of truth has arrived. Competitors can read the red envelope. Tommy: I thought of the worst hypotheses. Francesco Oppini is in tears. It is Maria Teresa Ruta who takes the red envelope to read the contents. But the envelope refers to Alfonso: “The girlfriend has an incredible surprise in store for you and Alfonso can’t wait to reveal it to you”. Signorini: “This friend will go down in history for many reasons. You are a fantastic group and we are convinced that there is still a lot to tell. For these reasons Canale5, Mediaset and the public have made one loud request that we you send: we are going to spend a fantastic Christmas together, an unforgettable New Year and stay together until the beginning of February 2021. We are going to make history ”. The expression of the VIPs becomes ice, they think of a joke. The conductor announces that he has told the truth and confirms it

The fear of Alfonso Signorini

In the final episode of Big Brother Vip 2020, Alfonso Signorini officially announced that the reality show would be two months longer than expected. “I inform you that we will officially continue on Christmas, New Years Eve, Epiphany and we will arrive with Big Brother Vip until the beginning of February: he had made it known. He then added that he was genuinely concerned about the reaction competitors might have: “There will be another problem. How will we communicate it with our Vipponi friends? There is the red envelope that we will have the boys open in due time.” How will they respond? Listen, we’ll think about it another day. “

Franceska Pepe’s shocking comment: “It will be a pleasure to see them dissolve”

Alfonso Signorini also asked for comment in the studio after the great news was communicated to the Vippos. And he asks the house’s former competitors if they would have agreed to stay in their place until February. Myriam Catania as a mother understands the loss of Elisabetta Gregoraci. Than Franceska Pepe intervenes with a shocking comment that has certainly not gone unheard: “I wouldn’t have accepted it, but it will be a pleasure to see them dissolve”, he said sarcastically. Signorini: “Ah so enjoy …”.

In the house for Christmas, New Year’s Eve and Epiphany

The participants of Big Brother Vip 2020 spend Christmas, New Year and Epiphany at home. Elisabetta Gregoraci has in recent weeks opposed the hypothesis that she would spend the Christmas vacation far away from her son Nathan. Meanwhile, before tonight’s announcement, Alfonso Signorini wanted to give some pointers to the participants. In fact, he told them last week: “The envelope is red, like passion or like Christmas“. The Vipponi looked at each other and expressed clear dissatisfaction. Francesco Oppini’s shocked expression, in particular, left no doubt that the reality show’s closure in February is not good news for him.