Autostrade, Salvini: "I voted for the save-Benetton nationalization … Looking at the balance, I agree"

ROME – Opens the nationalization of Autostrade. And admits that he voted for the save Benetton in 2008. But immediately exclaims: "Of those who have ruled for years and have signed and verified the concessions, a good silence would be appropriate". So the Deputy Prime Minister and Minister of Internal Affairs Matteo Salvini in Agora on Rai3, responds to the Democratic Party that had been attacked on social media. The political controversy surrounding the collapse of the Morandi bridge in Genoa does not stop.

The nationalization of Autostrade. Salvini also intervenes on the topic of the possible nationalization of Autostrade, hypothesis launched by the Minister of Infrastructure Danilo Toninelli. Commentary on the Secretary of the League: "Nationalization" Looking at the balance, I say yes: I am no pros and cons Autostrade or Benetton, I am not against private parties, but in this case the private person has made a mess. not for vengeance but for justice. "Again," I do not want Genoa to come to the double catastrophe experienced by Viareggio victims, "says Salvini, recalling the complicated judicial process relating to the railway accident of June 29, 2009 in the Tuscan town.

The timing for the withdrawal. For Salvini, the withdrawal of the concession for motorways "will not arrive within 15 days: because we are rightly a civilized country, there will be room for the other party, to explain what he has done, what he has not done, to to justify themselves, during these weeks we will evaluate what is best for Italians ".

Five Stars and "No Gronda". Not only that. The Deputy Prime Minister also talks about the case of the Gronda and the political proximity of the allies of the government against the movement that disputes the realization. "The Lega was first for and is now in favor: I am in favor of new infrastructures, a growing country that hopes: of course we would be convinced M5S of the validity of the work and also of the Democratic Party that resisted when controlled Liguria" says Salvini.

The selfie at the state funeral. Then the controversy about selfie after the funeral of the state in Genoa. "I am impressed by the polemics of some politicians, I am struck by the low level of a certain part of Italian journalism that does not represent the beauty of the country, and the beauty of the country is that, despite the massacre, there are people who already told me the next day, Salvini let us start again ". "If at the end of a two-hour job a girl asks me: Minister, please, can I take a picture of her, should I fire her or respond politely?" 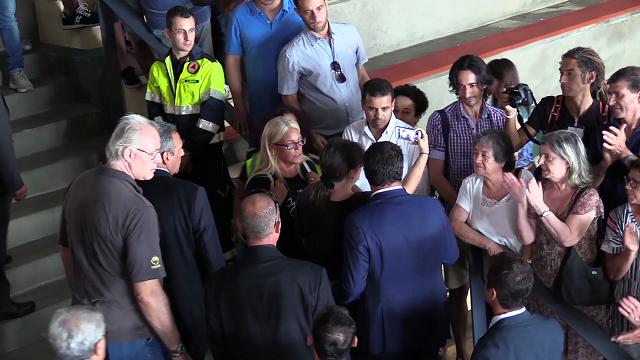 M5s: "Forza Italia and PD have favored Benetton". The five-star movement will return over the controversy. In a message on the grillini's official blog, we read: "Over the years, center-right and center-left governments have built up an insane system of favors to dealers, which significantly contributes to enriching them at the expense of maintenance of our infrastructure ". It is the accusation that the 5-star movement of his blog is moving in Fi and Pd that "have decided to be aligned with the Benetton" and not with "the requirement of justice and security that comes from of millions of Italians ". "With the Government of Change all these shameful islands of privilege will be opened and eliminated".