Calabria: 10 deaths in the deluge in flood, you are looking for at least 3 missing people 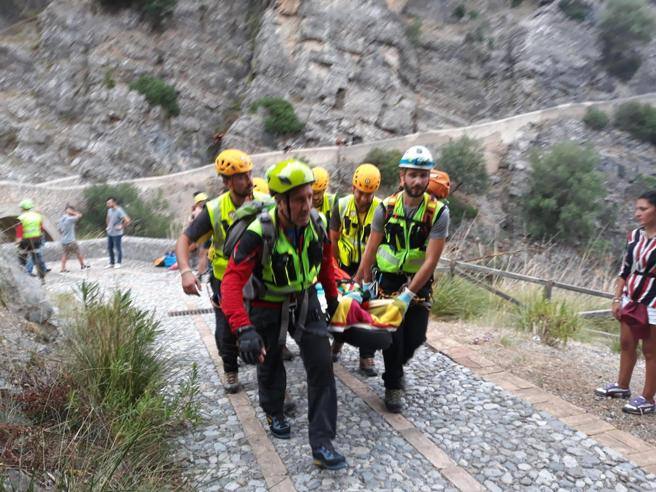 There are ten, six women and four men, the victims of the flooding in the ravine of Raganello in Civita, in the province of Cosenza. At least 3 missing: "The difficulty of having a clear picture of who is missing the profession is due to the fact that hikers (among them there were some citizens of Lombardy, etc.) were in dispersed groups", explains the head of the Civil Protection Calabrian from, Carlo Tansi. But to be overwhelmed by the tidal wave were also people who decided to take a dip in the stream. The body of a 14-year-old was actually recovered with only the bathing suit, without the equipment and clothing needed to pull the gap: this figure, which was added to the lack of control over the access in the area, makes it difficult to quantify with certainty number of people to search. Eleven people hospitalized, of which 5 serious: among them also a child of 8 years, recovered in a state of hypothermia and transferred in eliambulanza to the Cardarelli of Naples for the criticism of his condition. The investigations never stopped: they went through the night and continued this morning with the daylight, even with the help of volunteers.

The disruptive power of the water, fueled by the violent storm that hit the area, has smashed the victims even five kilometers from where they were overwhelmed. The survivors speak of a roar, followed by a wall of mud that has dragged everything. For this reason, the relief workers have moved further downstream, to the mouth of the river, where the harbor master's office is also activated, for fear that some people may have landed at sea. Helicopters stood up during the flight to cover the wide range of action. "It was a real tsunami – says the vice president of the Alpine Rescue, Giacomo Zanfei -. These are events that happen once in their lives. "Whoever intervened first on the spot, talks about scenes" frightening "and" unprecedented violence. "An eyewitness talks about the announced tragedy:" This place has become a fairground – report -. It is not possible to see children with flip-flops on the paths and women with beach clothes. "The Raganello stream is wedged in the mountains of the Pollino National Park, one of the largest in Europe, with glimpses of waterfalls and rapids, but it is an adventure not recommended for non-experts. and not all of them turn to professional guides to visit the canyons and go rafting, with a preference for do-it-yourself tourism.

Overwhelmed by the flood in the Raganello gorges: Antonio, the guide who went to Rigopiano and the other victims

Antonio De Rasis, who had been in Rigopiano

The prosecutor of Castrovillari has opened a file, still against unknown persons, for manslaughter, culpable injury, flooding and the omission of official acts. The aim is to identify any criminal implications of the story: "We have to understand why the tractors were there" despite the bad weather conditions, "says Prefect Paola Galeone. In addition to the free number of the Civil Protection Authority (800 22 22 11), the prefecture has made a line (0984 8980651) available to the relatives of those who do not have the appeal. The autopsy on the bodies of the victims has not yet been arranged, but they present all the traumas that are typical of the violent air resistance in the water. "We have to do more about safety – says the president of the Pollino Park, Domenico Pappaterra – although in this particular case we are faced with an unpredictable event that has even touched and surprised the guides". For Zanfei too it was a tragic fatality: "The guides are very good people, specialized, high-level, they are not improvised, nobody should be criminalized".

The alarm for the possibility of storms that are as violent as sudden, due to the tropical flood of our climate and which we have to get used to, has, however, been issued and apparently ignored. The statement contained a "notification of hydrogeological and temporal criticality" reveals the director of the multifunctional functional center of the Arpacal, Raffaele Niccoli. Instability planned for today throughout the region, where a yellow warning has been issued. Specifically, precipitation is expected, especially on the mountain ridges and therefore also on the Pollino.

The condolences of the authorities

Unbelievable mayor of Castrovillari, Mimmo Lo Polito: "It is a tragedy that gets upset, coupled with the terrible climate this summer, we just hope that the number of deaths will not increase." "Surprising and surprised", the chairman of the regional council of Calabria, Nicola Irto: "Bad weather has trapped that gap". "Worried by the disaster", also the Minister of the Environment, Sergio Costa, who met some of the wounded and their relatives in the hospitals and conducted an aerial photo survey at the scene of the disaster. «My thoughts go out to the victims and their families – Tweets the Minister for Territorial Cohesion, Barbara Lezzi, thanks the rescuers.