Flames high, huge pillar of smoke In focus 24 prefabricated, the base camp of the construction site of the third lane 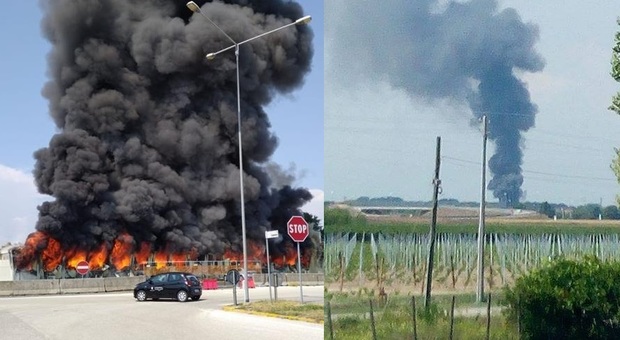 LATISANA – Alarm fire, right away gigantic column of black smoke visible for kilometers and high flames, Frightening. Today the fire was violently at 12.45 pm on the 23rd of August in the old tollgate of the A4 of Latisana, in the municipality of Ronchis, today used as a "base camp" for work on the third job. It was a fire to catch fire container that houses offices. The prefabricated buildings are actually used by the employees of the management center Autovie Venete, the highway company and van Tiliaventum , the consortium of companies formed by PIZZAROTTI and The Eccher building the third lane in the section of the motorway between Alvisopoli and Gonars.

Fortunately, at the time the fire developed, most employees were at lunch – for unknown reasons – the flames came from one of the containers in which the offices were housed. The flames quickly spread to the 24 housing modules: the workplaces were destroyed by the flames and a dozen cars were burnt or badly damaged. It was just an employee of Autovie, back at the office, around 12 and 50 to realize that the front door came out of the smoke and the first flames. A fire that spreads immediately.

The fire forced the Autovie Venete motorway company to a race against the clock avoid delays to sites with a third lane. Autovie Venete technicians and IT experts are already working to establish connections with the Tiliaventum optical fiber network. An indispensable activity to restore the computer stations the Concessionaire team will resume work from Monday even if the prefabricated buildings occupied by Autovie Venete have been completely destroyed for some time, the Autovie employees are "hosted" in the Tiliaventum conteiner. A temporary solution that makes the continuity of the work possible, without incurring any delay, a goal that both the Concessionaire and the executing company want to pursue at all costs.

On the spot are the fire brigade of Latisana Lignano and Portogruaro and the carabinieri of the company Latisana. The causes of the fire that completely destroyed the structure in a very short time are not yet known.