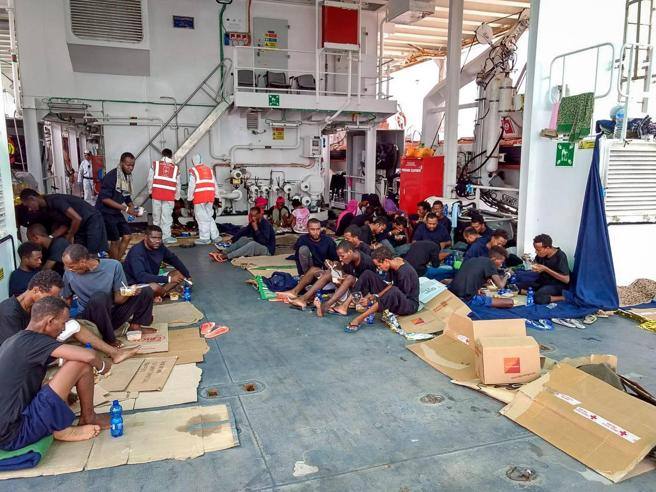 Il Nostromo del Diciotti, patrol boat of the Italian navy, is of Eritrean origin and for this reason he has been able to speak aboard on behalf of the Minister of Home Affairs, Matteo Salvini, with some of the 150 immigrants: it seems that the boys rescued from our sailors in the middle of the Mediterranean were they moved when they heard their language in the words spoken by a man in uniform and stars: "How long will we stay on the ship? Will you take us back to Libya? ? "

The line of the Viminale

On the eighth day of "quarantine" the Eighteen is moored in the port but still in "navigation cut-off" because the landing mission has never arrived: we do not yet know who to give it, formally, also because the landlord, the Minister of Infrastructure Danilo Toninelli, is hanged on the "grounds of public policy", claimed by the person responsible for the Viminale Matteo Salvini. After the go-ahead for the landing of 27 minors who were sent to the Commander of the vessel via Facebook on Wednesday, Massimo Kothmeir is confirmed in a granular manner on the hard line: "On the Diciotti are all irregular, expect concrete signals from Europe "for the migration of the migrants. The Viminale does not give up for the time being. But at least "a little" of the pietas with the twenty Eritrean women who are very ill on board, "tried the former president of the room, Laura Boldrini, to force that as a parliamentary, the ship could" inspect "as the regional deputy Claudio Fava he asked the intervention of the head of state.

In the evening, Salvini's staff confirmed (via text message, no official statement) that "there are no tensions in the government" and that the Minister "greatly appreciated the words of Luigi Di Maio on the European Union". In fact, today in Brussels there is a crucial appointment for the sherpa's of EU governments trying to solve the Diciotti case. Deputy Prime Minister Di Maio took the ball to Salvini, threatening that Italy "will no longer pay its 20 billion annual contribution to the Union if the commission does not meet the removal of the migrants of the ship". But the signals from the EU Commission and from Berlin ("We have not yet decided") are not encouraging. If the EU does not "strike a blow", as Premier Conte hopes, and the Quirinale perseveres in its watchful waiting action, the Diciotti case risks a step back from the boomerang effect for the Viminale who would only be in the front line.

The investigation into the power of attorney

At that time, Minister, Quaestor, Prefect, General Order of the Port Authorities should clarify what the exact command structure was that caused the "detention" on board of 150 immigrants and 6 crew members. The parquet of Agrigento works particularly on this point, which does not exclude the possibility of abduction. And that the situation is confused, proves the semi-serious trust, but not too much, that the commander Kothmeir (also attacked by Forza Nuova: "It is believed that it is an NGO"), he did the substitute Riccardo Magi, who also the ship visited: «When we were at the edge of the territorial waters, I asked my order:" Is it not that I put the silver bracelets around my wrists when we disembark? " ». When asked for an opinion on the detention procedure on board without any judiciary, the commander would have replied: "We are beyond the permitted time limits". The ship also received a delegation from the Authority for the prisoners led by Daniela De Robert, who was able to check "the precarious circumstances in which the stay on board is prolonged by many cases of scabies": "Little is needed to cure these pathologies, but if people are allowed to sleep on cartoons outside, it is difficult to solve the problem ". When it is evening – and after a few moments of tension in the harbor with the police in riot police for two groups of demonstrators for and against the migrants – from the bridge there is a song that radiates the sound of a prayer. The community of Sant & Egidio makes her proposal to Salvini: "The committee that receives asylum applications can come on the ship and the presence of a minister of worship as in prisons must also be guaranteed".