Salvini-Orban, the summit that increases the gap between Italy and Europe 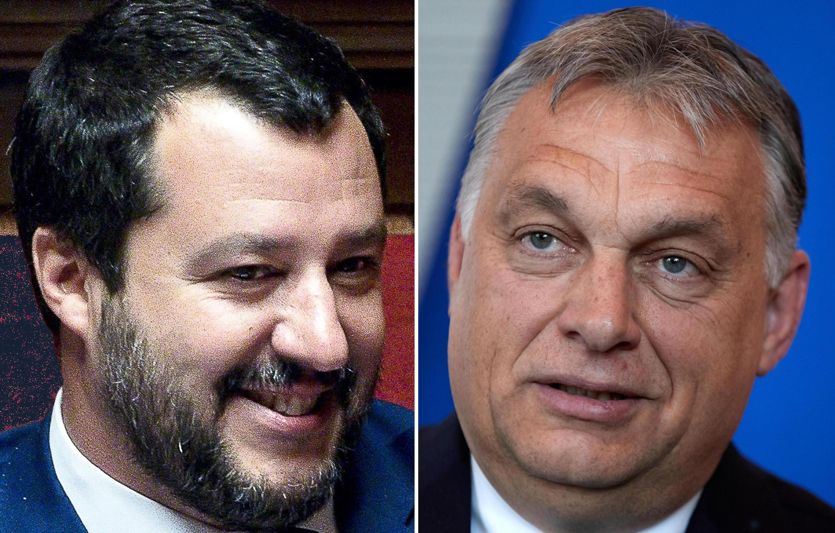 ROME – There is expectation and concern in the main European capitals for the outcome of the meeting (accompanied by several protests)
square) that today in the prefecture of Milan between Minister of the Interior and Deputy Prime Minister, Matteo Salvini with the Hungarian Prime Minister, Viktor Orban.

An appointment that has been fixed for some time, but which falls just after the partial solution of the case of about 150 migrants
saved from the ship Diciotti that is only accepted by one of the 28 EU countries Ireland that does not even look at the Mediterranean and fromAlbania, Candidate country for access to it EU. The majority of migrants will be distributed via the website under the structures of Italian dioceses Caritas who receives contributions from the Italian state for these activities, and thus denies what Salvini said (as long as that is not the case
Italians will pay).

Agreements on the defense of borders
Today's meeting Salvini-Orb will at least be a turning point in the relations between Rome and Brussels and it even increases the high fence that separates our country from that "hard core" of the big countries (besides theItaly, France and Germany) founders of the European Comunute, today Union. But from Budapest, the Minister of Foreign Affairs of Orban, Peter Szijjarto, pointed out
that there are convergence points in the migration dossier between Hungary and Italy. According to the head of Hungarian diplomacy
the defense of the borders of Europe consists in the management of immigration. Hungary has already shown that the limits of
country can be defended. Australia and Italy have shown that even sea borders can be.

Redistribution of migrants and the Dublin Convention, the distances between Rome and Budapest
A fragile alliance between Rome and Budapest, based only on the need to strengthen border controls
external and block the flows of migrants from the countries of origin during on the redistribution of migrants and the reform of Dublin, the Italian views radically differ from those of Orban. A flight forward, that of Salvini, that is the same Di Maio he tried to correct by marking the distance from Orban & # 39; s Hungary picking up barbed wire walls and refusing the placements
and speak of a meeting in Milan only "politics". As far as I am concerned – Di Maio remarked – who does not stick to relocations, is not entitled to European funding.

Orban in Berlin: "to be human you have to close the borders"

Fear of France and Germany
the French president was worried, Emmanuel Macron that in yesterday's speech to the French ambassadors' meeting in Paris, he reminded that Italy does not support migration against Europe, but for the Europe of the Structural Funds,
when I hear certain preachers. The President of the Italian Council – Macron added – knows well on the other side, on the one hand
highly structured line. Viktor Orban & # 39; s Hungary has never been against the Europe of the Structural Funds, of politics
agriculture, but against Europe when it comes to holding major discourses on Christianity. Increasing worry
if you add threats from the prime minister Giuseppe Conte and from the deputies Salvini and Di Maio on blocking contributions to the EU budget or the veto on the new Financial Perspective 2021 2027. The spokesperson for the German Chancellor Angela Merkel he stated that the financing of the European budget in the European treaties has been ratified and applies to everyone. But the answer
more detailed report from Brussels to the EU Commissioner for Budget Guenther Oettinger (Ppe) correcting the "caricature" figures of Di Maio (he talked about 20 billion annual contributions) while
it would cover a maximum of EUR 16 billion, but if we take into account what Italy receives from the EU budget, this will make a contribution
net more than 3 billion per year. As far as the right of veto for the EU budget is concerned, we take note of this, but we will not do that
comment.

Orban is increasing, the Visegrad Europe is being strengthened

The boomerang of the veto about the budget
Di Maio could not refute the correction of the 20 billion euros in any way, but replied by repeating that if Europe continues to listen, we will veto the budget and all the files on which it can be done. Too bad if we disapprove the financial perspective 2021-20.0o
we shoot on the feet. In fact, with our veto, the current fiscal rules that give preference to the funds would be extended
the eastern countries are structural but in our disadvantage while With the new outlook, an increase was expected for funds to countries such as Italy, only because the eastern countries have left
the economic crisis. But this was enough to ask the ministers Moavero and Savona.