Ship Eighteen days at Lampedusa with 177 migrants, a banner on the island: "Open Port" 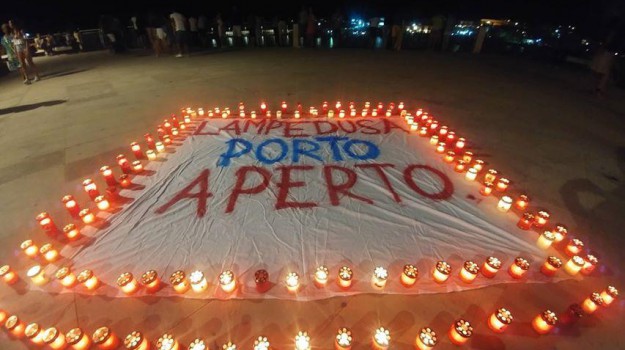 A white sheet with the inscription & # 39; Lampedusa open gate & # 39; and around an illuminated photo frame: it is the message that the island of Sicily is ideally directed to the ship Eighteen of the coast guard, who for five days for 177 days off the coast of Lampedusa has been with 177 rescued migrants and still without a landing .

The banner is located on the beach of Piazza Castello, at the end of the main street of Lampedusa (via Roma). It is an initiative of the Solidarity Forum Lampedusa, which unites various associations on the island and draws the attention of tourists there.
"It is an opportunity to draw attention to the subject – to explain to the organizers – and to remember the history of Lampedusa, always safe, so it is absurd that migrants here are forced to stay at sea".

A photo of the banner was published on the Twitter profile of Sea Watch Italy, an Italian department of the German NGO that deals with rescues of migrants.
Other banners have appeared in recent days at the Gate of Europe (with the inscription "Leave them at sea … How many votes are worth?") And at the new port ("Who saves a life saves the whole world").

The Diciotti ship is currently out of Lampedusa with 177 migrants on board. The boat, indicated in some declarations as a unit of the navy, "is inscribed in the special role of the military ship of the state body of the port authorities", as sources of the navy indicate.

The same sources add that the ship in question, "when engaged in search and rescue functions (search and rescue operations at sea), is therefore not an attributable task among the military, responds to the use and control exclusively for the command structure. the Ministry of Infrastructure and Transport ", and this" through the Italian Maritime Center for the coordination of rescue operations based on the same General Command Coast Guard ".