The ship Diciotti is moored in Catania, but the migrants remain on board 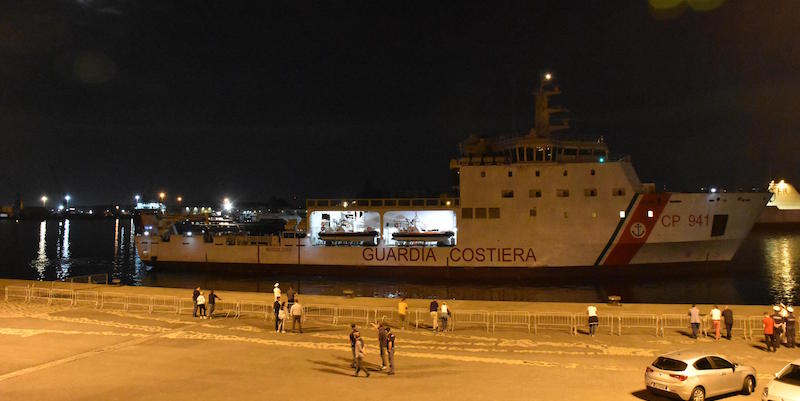 Update Tuesday – The Italian military ship Diciotti, which was blocked a few days ago by Lampedusa with 177 migrants, docked in Catania, Sicily on Monday night but has not yet received permission for the landing. The port of Catania was yesterday indicated by the Minister of Transport and Infrastructure Danilo Toninelli, to which the Coast Guard replies, but the Ministry of Interior has then issued a notice to clarify the situation: "Minister Salvini has neither given nor will not consent to disembark migrants on the ship eighteen, until it is certain that the 177 will go elsewhere ". Yesterday it was confirmed that negotiations were underway in the European Union to reach agreement on the reception of migrants on board the Eighteen: for the time being no solution was announced.

The situation was very tense, mainly as a result of declarations by Interior Minister Matteo Salvini, who had decided that the ship would be able to berth in Italy without first before other European countries had committed themselves to some of the migrants on board. to welcome the Eighteen. Salvini also threatened to delay migrants to Libya in the event of a failed agreement.

The European Commission has announced that discussions between European countries are in progress for an agreement on the reception of migrants on board the Eighteen, but no announcements have been made so far. It is also on Monday morning that the news that the Agrigento prosecutor opened an investigation "aimed at knowing the attempted entry of 190 immigrants outside the Community took place outside the island of Lampedusa, rescued from the motorboat" Diciotti "and still today hosted on the same ship of the coast guard ". The public prosecutor said that he had entrusted the investigation to the port authority of Porto Empedocle and the mobile squadron of Agrigento: the aim is to "smugglers and nationals engaged in facilitating illegal immigration" and "the circumstances of the 177 migrants. know "to identify survivors on board the military naval unit".

On the eighteen, we find the migrants who arrived aboard a boat on the coast of Malta the night before Ferragosto, but who did not want to help the Maltese government. The boat had therefore left the Maltese SAR zone (abbreviation of search and save, "Search and rescue") and had arrived near the Italian coast, where the eighteen intervened. The case had led to a rather harsh confrontation between Italy and Malta and a very tense situation between the Italian government and the Coast Guard.