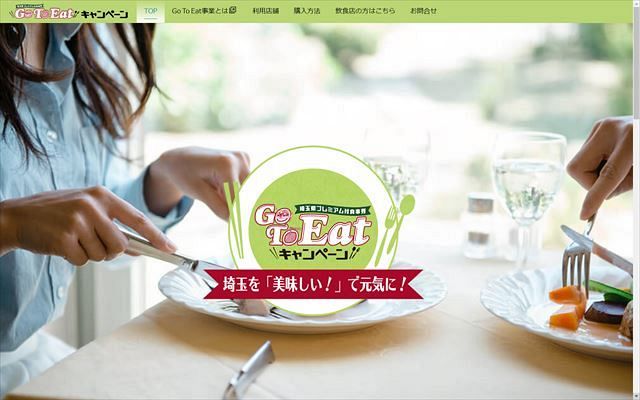 Home screen of “Go To Eat” in Saitama prefecture

Regarding the government’s support measure for the food and drink industry, “Go To Eat”, Saitama Prefecture announced on the 24th that it would accept second-term reservations of premium meal tickets for the first of the following month for indefinitely. Tickets will be issued for the first reservation, which started in October, but we request that you decline the meal tickets provided and the points you have earned.

Following a request from the national government, it was decided that day at the prefecture to take new coronavirus control measures headquarters. The start time of restrictions on the use of meal tickets issued and points earned will be in accordance with the decision of the Ministry of Agriculture, Forestry and Fisheries. The deadline for issuing meal tickets is until the end of January 2021 and the deadline for using meal tickets and points is until the end of March 2009. The prefecture is asking the government to extend the expiration date of meal tickets so that users are not disadvantaged.

In addition, in response to the spread of infection, the prefecture will take measures against infectious diseases based on industry guidelines such as hand disinfection and thorough ventilation for the time being from midnight on the 26th of this month based on section 24, paragraph 9 of the new Corona Special Measures Law. Application for suspension of the activities of restaurants which are not implemented thoroughly.

In July, the prefecture made a similar request to entertainment restaurants that had not taken adequate measures against infection. This time the target will be extended to other restaurants. According to the prefecture, the number of infections from restaurants and “night cities” is decreasing, but the absolute number is increasing.

Regarding the expansion of the intended facilities, Governor Motohiro Ohno asked the press for cooperation, saying: “Measures to encourage thorough measures to prevent the spread of infection. It is a message with a strong sense of crisis as the prefecture.” (Kiyo Iida)