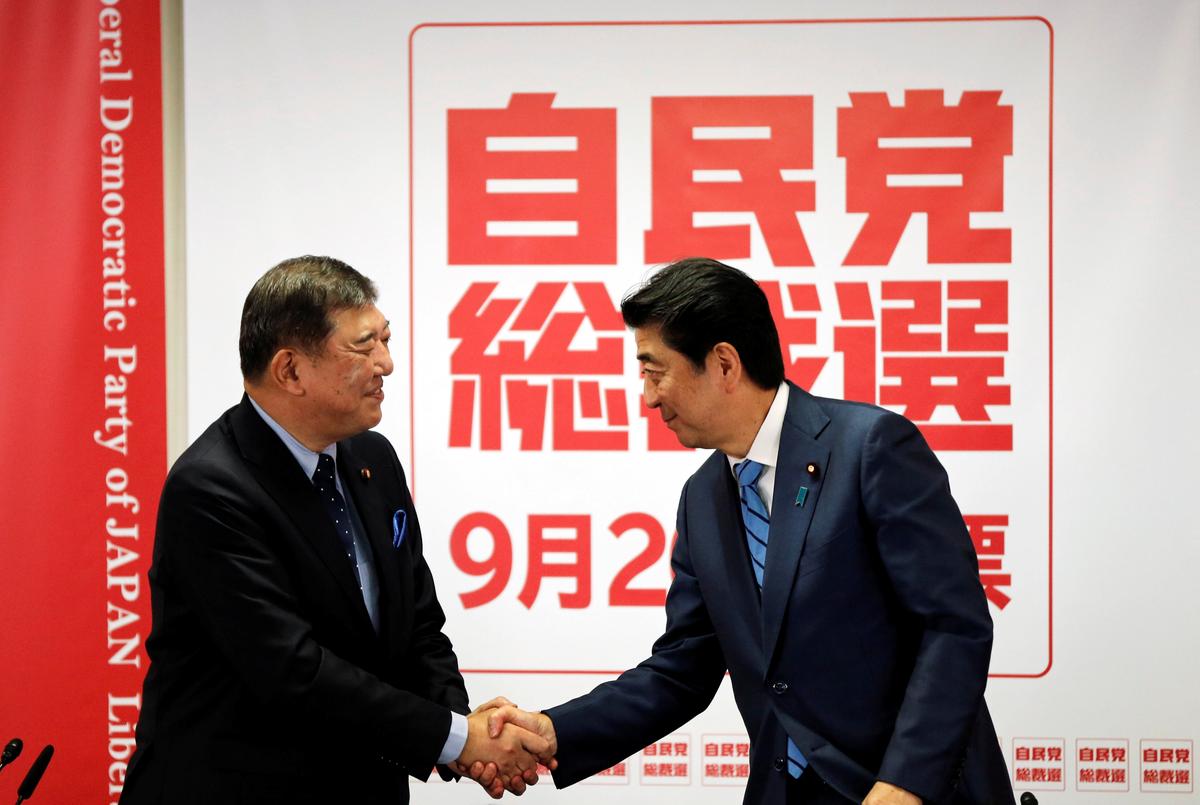 TOKYO, October 10 (Reuters) – The real debate of the presidential elections of the Liberal Democratic Party began. Prime Minister Shinzo Abe and Shigefumi Shigemoto, who ran for the weekend, went to a press conference and a joint press conference at the headquarters of the party on Monday morning. Prime Minister Shinzo Abe announced his intention to submit a constitutional reform bill to an extraordinary Diet that is scheduled to be convened this fall. In October 2019 the increase in the consumption tax said that he would like to carry out as planned.

The real debate on the presidential elections of the Liberal Democratic Party began on 10 September. Prime Minister Shinzo Abe and candidate secretary Shigefumi Ishiba, who turned the day, went to the press conference and a joint press conference at the headquarters of the party in the morning. Both candidates to shake hands at the end of the interview. Shot in Tokyo (2018 Reuters / Toru Hanai)

Ishiro points out that it does not lead to increasing personal income when evaluating the performance of avenomics. Emphasizes the need for measures for regional creation and low incomes. Both candidates will focus on major power outages due to the earthquake in East Hokkaido earthquake, and the discussions between the government and the ruling party on the energy infrastructure are likely to become active.

The presidential elections were announced on the 7th, but in view of the impact of the earthquake in Hokkaido, both candidates continued to participate in election activities until the ninth. It is likely that three Abe prime ministers will be elected as close as 80 per cent of parliamentary members, but depending on the policy debate, party members and the voting behavior of friends will not change the election situation. Nonetheless, attention is gathered on this point outside and outside the party.

Prime Minister Shinzo Abe said he would tackle the landlining of the country for three years to maintain the lifeline by means of disaster prevention and disasters based on repeated disasters.

As a result of six years after becoming prime minister, he also assumed the appreciation of the yen and restored employment, saying that he would like to continue to shoot three arrows through monetary easing, fiscal policy and growth strategy.

When the president was reappointed three years ago, the target of 600 trillion yen of the gross domestic product (GDP) would "realize around 2020". Consumption tax emphasizes: "We will respond to, for example, stimulating car and housing investment by learning from the previous reactionary collapse."

With regard to Moritomo-cumulative issues, he said: "We will manage the administration politely against various criticisms." In diplomacy: "I myself will have to face Kim Jong-Il, chairman of the Kim Jong Il", prepared to solve the kidnapping problem by direct negotiations between Japan and North Korea and to show leadership in relations between Japan and to fully normalize China. I made it clear.

Ishiro stated that the inferiority is being told: "We must not lick the voters," he said, an attractive policy across the country and emphasizing "trying elections with the whole body". "The core of economic revitalization is regional creation", while corporate profits improved with avenomics, it also criticized that "the decline in labor participation and disposable income is the biggest problem" and the production of enterprises. We emphasized the salary increase on the basis of sex improvement and improvement of the profitability of the agricultural, forestry and fishing industry.

He emphasized people who are regarded as underclasses, especially irregular jobs, "the responsibility of politics to touch the light".

With regard to the earthquake in Hokkaido, the direction of both candidates agreed with the recognition that it is necessary to re-examine the energy infrastructure. Ishiro points to the importance of distributed power supply to prevent large-scale blackouts. Prime Minister Shinzo Abe also said: "Not limited to Hokkaido, it is necessary to monitor the overall power infrastructure."

Our Code of Conduct:Thomson Reuters "principle of trust"