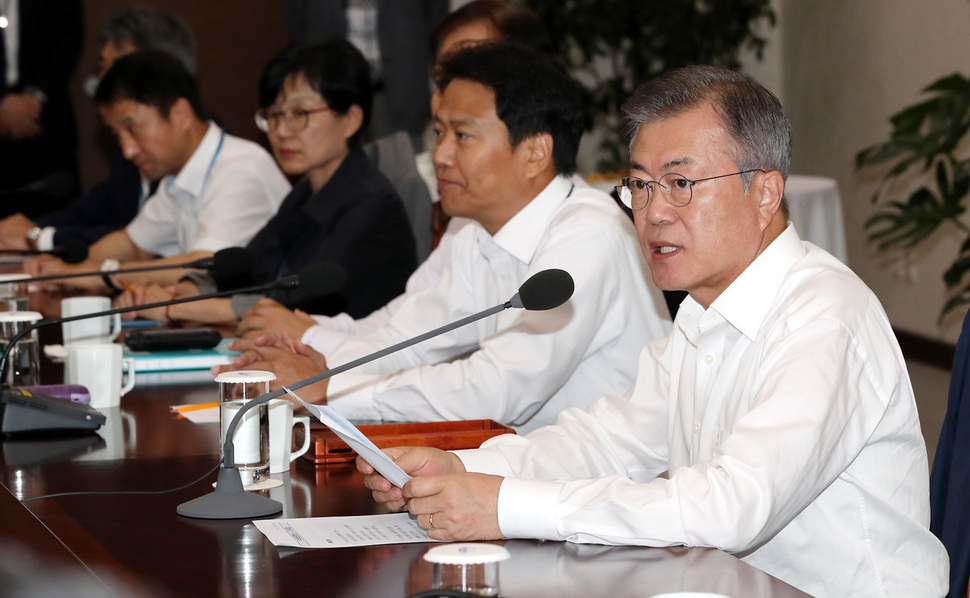 President Moon Jae-in greeting in the afternoon of the 20th on the Cheong Wa Dae chief and the assistants. Cheong Wa Dae photojournalist

President Moon Jae-in acknowledged the government's responsibility for the recent recession in employment. He also ordered the Cheong Wa Dae and the government, which recently had a controversy, to prepare an extensive plan with a resolution to "go to work". If the situation does not improve, it is said that he was prepared to ask the Chief Policy Officer Changhae Chung and the Minister of Finance and Economy Kim Dong-yeon, the Minister of Strategy and Finance, to take responsibility for the situation.
"The employment situation does not improve, but it gets worse," said Moon in a speech during the meeting of the president and assistants at the presidential office that day. "The government is trying to increase the number of good jobs to solve the employment crisis." I have to admit that the results were not enough. "This is the first time Mr. Moon & # 39; mentioned policy responsibility & # 39; to the employment situation that has been slow in recent months.
On the first day of his inauguration, President Moon presented the composition of the committee of job directors as the first employment directive, and he founded the job status board & # 39; in the office, stressing that the job problem is the highest priority of the government. However, the employment situation continues to deteriorate. According to the statistics released by the National Statistical Office on 17 July, the number of employed employees only increased by 5,000 per month last month. This is the lowest level in eight years and six months since the decline of 10,000 in January 2010, the aftermath of the global financial crisis. The party, the Chungcheong and the Chungs held a meeting on the previous day "Employment Shock", but they were also criticized for revealing only differences between Chung Hae-seong and Kim Dong-yeon.
In the short term, the signs of a better work situation are unclear and it seems that the government's economic policy has lost its credibility and can therefore lose its power to govern the government.
President Moon, however, has criticized the recent criticism that employment deterioration is due to a revenue-led growth policy, such as a drastic increase in the minimum wage. "There are sectors and ages in which the employment situation improves, and there are areas and ages where the employment situation continues to deteriorate, and there are also structural factors that are difficult to address, such as population and industrial restructuring, automation and online shopping."
The actual employment statistics from the National Statistical Office show that the employment rate of young people (aged 15 to 29) and older workers (older than 60) has increased by 0.2 percentage point compared to the previous year, pointing downwards . Employment in health and welfare services and public administration increased by 7.7 percent and 6.1 percent respectively in the previous year. The information and communication industry and the financial and insurance sector, which are in good shape, rose by 8.8% and 8.6% respectively. The increase in employment in these sectors has in one way or another also contributed to increasing the employment rate of young people and the elderly. On the other hand, the number of working employees decreased due to the restructuring and automation of the shipbuilding industry, automation and online shopping, while the processing industry (-2.7%), wholesale and retail trade (-1%) and the hotel and catering industry and restaurant industry ( -1.8%). The construction sector (1.8%) also saw slower employment growth than normal. The slowdown in manufacturing, services and construction also fueled the deterioration of the employment situation in the 1940s and 1950s.
President Moon mandated the economic team to "take more diverse and stronger measures for difficult sectors and ages." and ordered aggressive fiscal policy. The forecast of tax revenues for this year and next year is sufficient to use the increased tax revenues. He also insisted: "We will do our best to accelerate regulatory innovation and the fair economy for private sector investment and expansion of employment and to get the cooperation of the National Assembly." It is clear that the government's three important economic policies, such as income-driven growth, innovation growth and the fair economy, will continue in terms of the worst employment indicators.
In particular, President Moon said: "I am confident that both Cheong Wa Dae and the government's economic team will give confidence that the government will do its best in difficult work situations with perfect teamwork, I hope you do. "What we should fear from the policy is to lose people's trust instead of the difficulties." In fact, it was a public warning aimed at "tweet" & # 39; Mr. Moon can be interpreted as saying that he would not tolerate any policy overrun that would "restore" the two economic leaders, but would stir up public turmoil, and it appears that the emphasis has repeatedly been on implementing a & # 39; unilateral & # 39; policy by blocking elements that can be seen as internal departments in advance A spokesperson for Cheong Wa Dae said: "I think that the way we approach each other and emphasize the content we want peeling. "He said government policy and our government's philosophy went smoothly. The Deputy Prime Minister said he would solve the real problems that might arise in the process. I think they are the same story. & # 39; Gimbohyeop heoseung reporters [email protected]