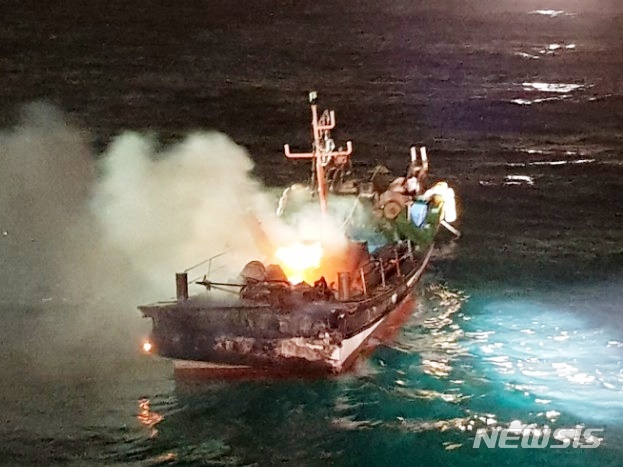 【Seogwipo = Newspaper】 Cho Su-jin Reporter = Jeju Seogwipo Seongsan Port Fire broke out on the fishing boat in the sea, but fortunately there were no casualties.

According to the Seoguipo Marine Police on December 25, fire broke out at 7:30 pm on the sea side, about 1.3 km southeast of Seongsan Harbor, at No. D ship No. 2.97t, a crew member.

Tourist A, who at that time visited Seongsan Ilchulbong, reported on the day of the incident a smoke and a flame on the ship at 7:46 pm and reported 119th on the ship Hanmo (79, Jeju Udo), the captain of the D ,

Seogwipo Hae-Kyung sent a 200t-class patrol boat and a lifeboat along the coast to the Seongsan police station to the scene of the incident and requested the rescue operation of the ship near the accident area.

Fortunately Han was rescued by a fishing boat M (3.64 tons), which was passed through the nearby area.

The lifeboats on the coast and patrol boats at the Sungsan police box, which received the report, evolved the fire with the help of fire hydrants. The fire was completely switched off at 21:52.

An official from the coastal area of ​​Seoguipo said: "We will investigate the exact accident after we have gone through safety management, such as towing in preparation for secondary accidents such as pollution of the sea."