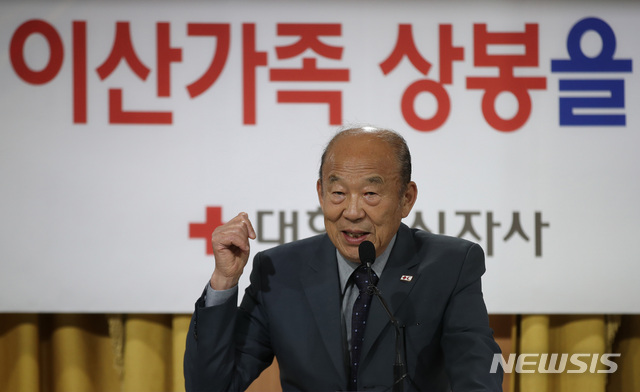 The North and South agreed to hold an extra family reunion ceremony during the year, and agreed to discuss the details through discussions at work level and the like.

After the reunion of the 21st separate family gathering event on May 25, Park, Kyung-seo, president of the Korean Red Cross Association, held a press conference at the family meeting in Kumgangsan and said: I agreed to do it again. & # 39; In addition, he added: "We decided to discuss the specific dates during the executive level discussions."

Park said: "The scale is comparable to the current scale." He said, "I think it will be in the year, but it will be possible by the end of October if the weather is good."

Park said the discussion about the need for reunion of various families such as North Korea and his hometown visiting team was also kept in a positive direction.

Park said: "We have reached a positive consultation with Park, who is in charge of the north, to bring the visiting team home as soon as possible." In the opinion of Park, North Korea would have a positive answer.

Park is reportedly planning to visit Pyongyang to promote discussions about the entire content.

Park said: "3000 to 4000 separated families will leave the world in a year and in the next 7 to 10 years, separate family reunions will be difficult in this form," Park said. "As a person who pursues cooperation on the basis of humanism," he said.

In the meantime Park said: "During this reunion event the cooperation with North Korea went well." "The first family reunion after Panmunjom's declaration was successfully achieved with the cooperation of the north side."