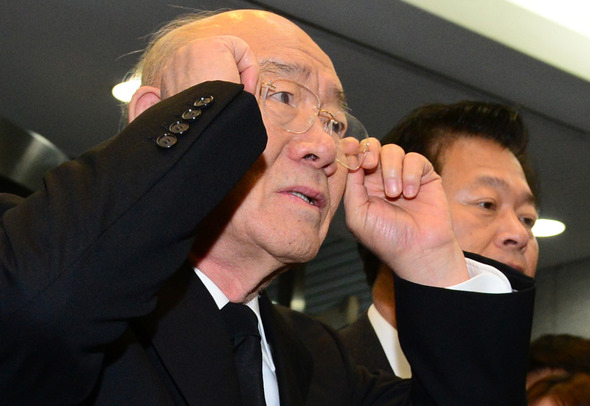 Chun Doo Hwan, who announced his intention to make a no-show during the criminal proceedings that will be held in the Gwangju District Court on 27 October. Article photo & # 39; s

Former President Chun Doo-hwan (87), who was indicted on charges of damaging the honor of Kim Jong-bae, who testified during the May 18 Democrat campaign that he shot a helicopter, will face the case of Alzheimer's ( senile dementia) he said. The Gwangju District Law, which has prepared for the trial against the premise of attending Jeon, got into trouble.
The wife of the former president, Lee Soon-Ja (79), made a statement on May 26th in the afternoon stating that he could not attend the court of his husband. "The former president, who was diagnosed with Alzheimer's in 2013, has so far prescribed medicine by medical staff," Lee said after disclosing the diagnosis of Alzheimer's disease. "His current cognitive ability is a lawsuit that has been filed Even if you explain the situation that you are, you can not even remember that you heard the statement after a while.It is doubtful that a normal legal statement can be made in so & # 39; n spiritual state of health, and he can no longer expect the statement to reveal the "substantive truth" of the purpose of the criminal case. "He also said:" I do not want the people who once were the president of this country, called the clearing and repeating the words that are not right before and after, The Gwangju Court, which only needs 10 hours to travel, does not allow him to be attended when he thinks of things that have to be looked at and cared for. "
The judge was alarmed by the fact that Jeon had unearthed the doctors. It is because the defendant has not formally announced the reason for non-disclosure. The court is also charged with the fact that the former prime minister, who was charged in May of this year, twice requested postponement and the trial was postponed for three months. In particular, since the court unilaterally informed the non-attendance via the entrance door instead of requesting an official postponement, the court will have to bear the burden of postponing the lawsuit. If the suspect is absent in the criminal proceedings without a special reason, the court can issue a court and arrest him.
An official from the Gwangju District Court said: "It is difficult to decide whether or not to go to court immediately because the applicant does not submit an official application before the expiration date or a reason for non-disclosure. will go with the trial on the morning of the 27th. & # 39;
The District Court of Gwangju originally intended to hold a lawsuit on the 27th at 2.30 pm on the judgment of Judge Kim Ho-suk, The court brought the court for this purpose from the legal system to the Supreme Court and measures for the safety prepared, such as placing 70 police officers in court and suburbs. The trial also limited the number of visitors (95 seats) for the maintenance of vermiculite.
While Jeon reveals the position of the absent person, the voice that arises for presence increases. Cho Jin-tae, the executive director of the 5th and 18th memorial, said: "Unilateral notification of not being present is not only a matter for the 5th and 18th generation, but also for the citizens of Gwangju." A sinner in history has to go to court to tell the mistakes and to seek forgiveness. "An official on the May 18 Breastfeeding Association said:" Even if the mothers of May and Chun Doo Hwang come down, they decided not to be angry and to wait for the results of the process, "said Chun Doo Hwan.
He was indicted on charges of defamation (alleged slander of lion) in a memoir he wrote in April, claiming that he had forged the testimony of his father. He was indicted in December 1995. On April 17, 1997, he was found guilty of 13 crimes, including rebellion, rebellion, murder, murder and murder, but he was sentenced to death in the first trial. (Penalty kick of KRW 220.5 billion) and his brother was confirmed and in December 1997 he received a special pardon.
Bakimgeun reporters [email protected]