Reconstruction of the thermal shock at a "Youngheung Thermal Power Plant" 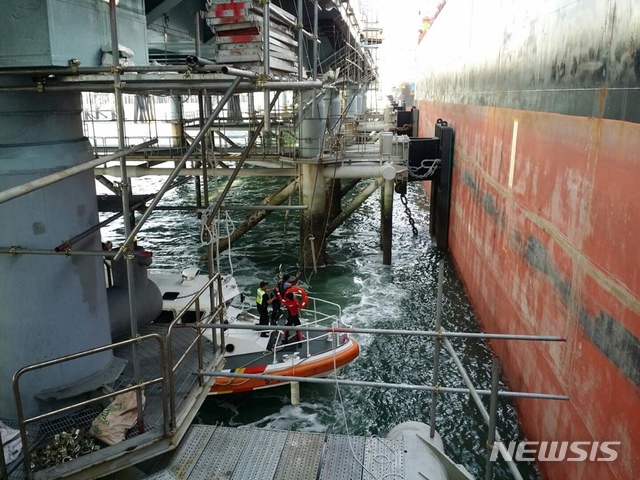 Lee Jung Yong reporter = Three workers working at the Yeongheung thermal power plant in Incheon have fallen into the sea, one person has been killed and one person has disappeared.

The accident seems to have taken place as a temporary stool set up by the employees collapsed.

According to a letter from the Yeongheung thermal power plant on 5 May, six workers were sent to G at 8:00.

They were responsible for repairing the spot where a bituminous coal ship from sea transport company P had been bombed at the second pier with the ship last March.

They worked under the box bar (steel sheet) paint (painting) of the P-ship that had been stripped by the crash before the accident.

A colleague who witnessed the fall immediately reported to the sea.

Mr. A and Mr. B. fell into the sea and Mr. C was rescued within 20 minutes by the sea guard after hanging on the rope with safety equipment.

Mr. B has not been found so far.

The seaplane is in the middle of a night search aimed at the pier that crashed with three expedition vessels.

An official from the fire brigade said: "There was a testimony from witnesses that a rescuer had worn safety belts, but two missing persons rested and released safety belts."

Based on witness statements at the moment, the seafarer intends to examine the precise precautions, such as wearing seat belts.

Youngheung Thermal Power Plant has formed an emergency room. P, the client of the repair work, and G, the construction company, operate the headquarters for countermeasures against accidents.