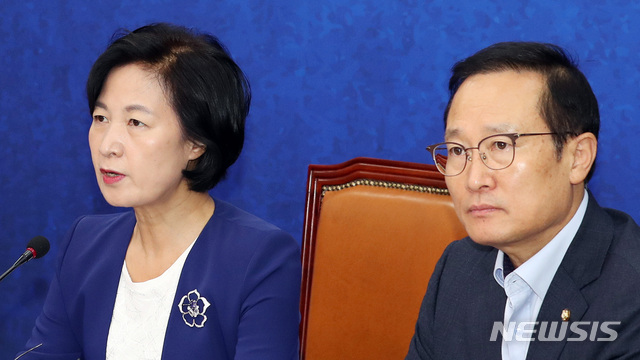 Moreover, the representative of the Democratic Party said on July 24: "We have the honor to be the first party leader to end his term."

Chu was present at the highest commission meeting held at the Yeouido National Assembly in Seoul on the day of the party. The meeting was the last meeting of the Supreme Council, where Chu Chu was present as party leader.

Chu said: "At the congress of tomorrow, when a new leadership is chosen, we will end the horizontal and peaceful transition of the party," he said. "If I am two years old, then I will be two years and then two years, 100 years of celebration will certainly be done," he said.

He said: "The two Presidents of Kim Dae-Jung and Roh Moo-hyun will look loving." He said: "We must strive to continue the way they want to go, Moon Jae-in and Democratic Party.

Chu remembers the past two years: "The most memorable memory is the candlelight revolution and the regime change," he said. "It was a victorious national victory over victories of democracy over the troops behind us." "Our party has come up here in accordance with the will and order of the people," he said, adding: "Even if the people's support for us in the second year of the presidency has cooled down, we do not assume that the aspirations of the nation have cooled down. "

He said, "We have to look back on whether we are comfortable or lazy," he said. "In this respect, our party and government must first, second and third, be reformed."

Chu said: "The leadership elected next morning will have the task of bringing the unity and unity of the party together and bringing the party together to win the success of Moon Jae-in." Democratic party has become a political party through presidential elections and local elections "He said He added:" The next leadership will support, in the expectation that we will do well with integration, reforms and social parties. "