The social event on Facebook is a call to not attend the opening of the IKEA store.

It has been published on Friday and has not received many responses from Facebook users.

Such an invitation was made on Solona Club's profile.

It has been published on Friday and has not received many responses from Facebook users. 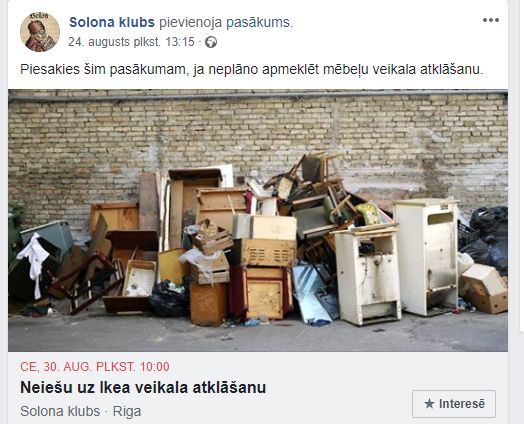 Meanwhile, people in reactions saw such a measure with humor.

"There was an advertisement in the catalog that only 30 cents of ice." It is a pity, because I have to work cheaply on the Cruiser, but I will not be able to do it on the day itself, because my thoughts only concern the discovery of the IKEA store and the happy ones there! "says in a comet.

It should be remembered that the first store in IKEA, the Swedish company for the improvement of the home product, will start working in Latvia on 30 August.

The IKEA store is located at Biķeru Street 2, in Dreiliņi, in the province of Stopiņu. It covers an area of ​​34,500 square meters, and the territory of the store in general is 10 hectares. An IKEA restaurant with 450 seats, as well as a bistro and a Swedish supermarket, will work in the IKEA store.