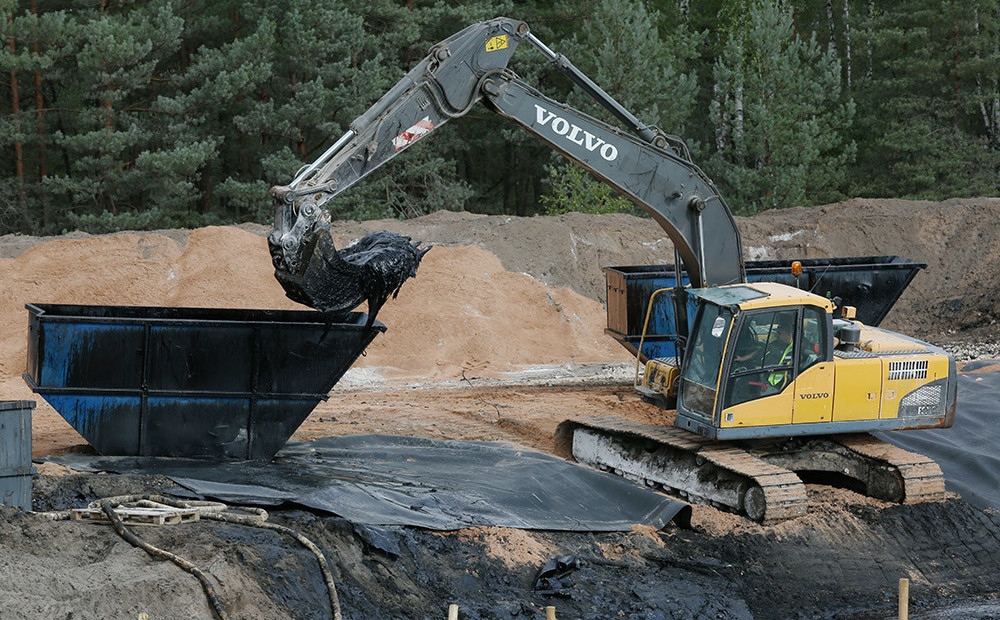 He explained that the waste from the pond has been neutralized by mixing it with chips. In the Angarra, located in the area of ​​the ponds, this mixture is allowed to cool down, so that it can then be delivered to the Cemex factory. According to Lielkalns, the first 2000 tons of the mixture has already been released for incineration, while already 3000 tons of garbage has been exhausted from the southern pond.

Santa Kļava, head of the environmental project department at Cemex, said that the neutralized mixture produced by the Incukalns Eko global partnership is used for the production of cement clinker, and this process is not fast. In addition to the neutralized mass, gas and coal are added to the heating process, so that the remediation works of the pond will continue until 2021, but Cemex intends to burn the total amount of neutralized turbine to 2023, which is also the closing date for the project.

"It is essential that our water does not burn during burning and that it does not produce ash – everything stays vivid at high temperature, it is safe for the public, the environment and does not affect the quality of our product. [..] We can burn 1000 tons per month, 10,000 tons per year. We can no longer promise, "Kļava said, adding that the company must also comply with the permitted emission limit values.

Cemex stores its neutralized turbine from 2021 in its warehouses to ensure that the pond is not cleaned.

Director-General of the State Military Service (INV) Inga Kolegova replied in response to the question of whether it was possible to carry out the treatment of the pond faster, that it was left to the work of the performing artists. "There are calculated flows, so somewhere, working faster, there would be no bottleneck elsewhere. [dīķu teritorijā] the works will take place three years, "Kolegova said.

Speaking of the northern part of the gutter pond, Kolegova noted that there is another situation – the rubble is buried with sand. From the part of the territory, pieces of waste are removed and the rest of the contaminated soil is washed, cleaned and put back on the ground. The rest of the gutron will be burned.

The Minister for Environmental Protection and Regional Development, Kaspars Gerhards (VL-TB / LNNK), said that the current project for clearing ponds is very positive, because everything happens on time and there are work aspects ahead of the planned deadlines.

The minister indicated that the site's purification project must be time-bound, so that 80% to 70% of the total costs can be covered by the European Structural Funds. According to Gerhard, together with the first cleaning round of the area, which was carried out by SIA Skonto Büve, the total project costs will amount to just over 50,000,000 euros.

As mentioned, the NSA officially signed a contract with the general cooperative venture "Incukalns Eko" for the remediation of the Incukalns waste compartments of 26.6 million euros at the beginning of February this year. The engineering supervision of the rehabilitation activities for 1.23 million euros without VAT is in turn carried out by SIA Geo Consultants.

The limited liability company was founded in 2016 and its members are AS VentEko, Eko Osta and JSC BAO.

The Cemex Broceni plant in the first incukalns sulfuric acid waste was fired in June.

It is intended that by the end of 2023 the total area of ​​the renovated land will be 2.5 hectares. The total amount of eligible funding for the implementation of specific support shall not exceed EUR 29 257 750, including the financing from the European Regional Development Fund (ERDF) – EUR 24 869 088 and the financing from public finances to 4 EUR 388 662. Of the total EUR 29.2 million, the general partnership is expected to pay 26.6 million euros for its work. The remaining 2.6 million euros is used to develop the project, and a number will be used to monitor the work of the limited liability company, the environmental monitoring of the site and other works.

After all pond renovation works in 2021, they are planned to be filled and covered with black soil, and after a further two years, a monitoring of the location will be carried out.

It was also reported that, in the event of disagreement between the VVD and the previous performer Skonto Büve, the implementation of the Incukalns Gutter Rehabilitation Project was at risk. The company announced that it was not possible to complete the work related to the current resources, while the SGB refused to allocate additional funds. Instead, the VVD broke the contract with the executor and ordered the VVD to leave the project implementation site.

After the VVD signed the contract with Skonto Building, the company appealed to the court and claimed compensation of 7.6 million euros – for the work done in 2015. In the meantime, at the end of 2016, a counterclaim was filed filed against Skonto Büve, which was added to the claim last year, with the company requesting EUR 13 million from the company.

The initial completion date of the Incukalns sulfuric acid ponds was at the end of 2015.

"Thanks for the lati" author Yoran, in love with Latvia: "I did not expect to feel so happy"

Vinona Raidere has been married to Kian Rivs for 25 years!

Italy continues to suffer from tragedies: at least 10 tourists have been killed in the event of a flood