The ponds of Inchukalns become fuel for the factory «Cemex» / Article / LSM.LV 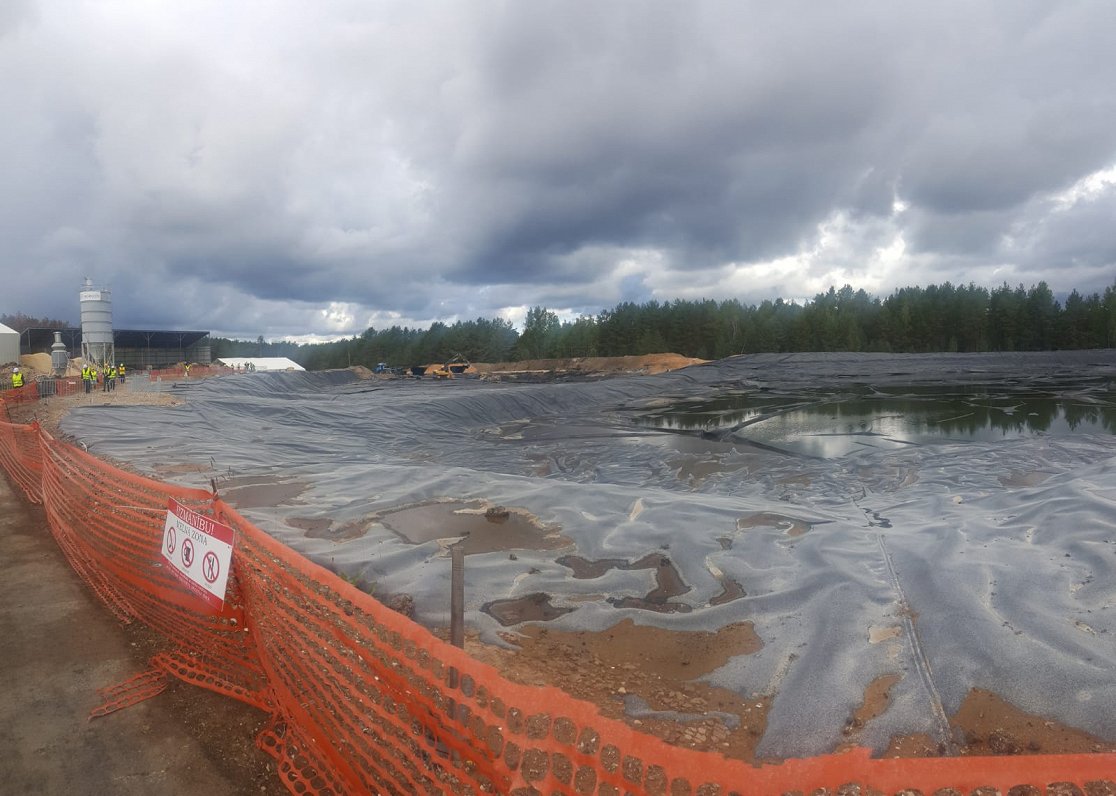 The first specially prepared trash cans were taken out of the Incukalns sulfuric acid channel area to be burned as an alternative fuel for the Cemex plant in Brocen. The work on the polluted site is carried out by the "Incukalns Eko", which estimates that currently about 10% of the total pollution is exhausted.

The Gudron pond cleans the "Incukalns Eko", whose representative Māris Kalniņš told us that 10% of the total pollution is currently exhausted in the southern pond. It is also visually visible – the pond water is largely drained and wadron covered with black material. On the one hand, it is exposed, and with an excavator, a thick, sticky mass that melts after the sulfur has been poured from the pond bed.

The depleted mass is delivered to the territory in a closed hangar, where it is mixed with lime and later with flakes, resulting in a solid, bulkhead, peaty material.

"The main difference is that we perform neutralization in pairs, but the previous partner, Skonto Būve, did it in a continuous flow, but each part has better control over the amount of additives and their handling as a separate fuel load. With the experience of this project with the "Skonto Construction" agreement, we are not going to ask for extra money or expansions, we have repeatedly proved it in our agreement and we count it, "Kalnins said.

A part was delivered to the Cemex factory in Brocenais, where up to now one and a half tons of waste had been incinerated. Santa Kļava, head of the CEMEX Environmental Projects Unit, added that the delivered tar is stored in purpose-built closed warehouses and only a small part of the alternative fuels is added to the main fuel.

"We are adding the prepared tar in small doses to the base fuel we are already producing – gas and coal." The ash remains in the fuel stove, which we will continue to use in the production of clinker, "said Kļava.

The State Environmental Service (VVD), as the contracting authority, confirmed that the executors fit in the agreed time and even anticipate the schedule. "What I am most pleased about is that the filler uses alternative chips for the production of alternative fuels and not waste from abroad.

And in general we are very hopeful that after three years there will be a green meadow ", said Inga Kolegova, head of the SFS.

It is expected that after two and a half years the first result will be seen, while in 2021 the intention is to fill the ponds and cover them with black earth. Monitoring is planned for another two years.

The total treatment of the Gudron ponds amounts to 26 million euros, most of which come from European Union funds.

Our monitoring shows that the future will be very good and that we will not have to invest more money ", added the head of the SFS.

At the beginning of the year the State Environmental Agency signed a contract of more than 26 million euros with the special Incukalns Eko, which was created for this competition, for the remediation of turbot ponds. Their supervision of one and a half million euros is in turn entrusted to Geo Consultants.

Previously, the saga of cleaning gutter ponds in Incukalns sulfuric acid lasted for years and complicated after the difference of opinion between the VVD and the company Skonto Büve about the amount of waste from Inčukalns had to be removed. The work was half finished, the dispute was settled by the court, but the implementation of the rehabilitation project was in danger.

The deadline for leaving the Gudron ponds has been postponed for several years. Now the destination is 2023, but after all the pond clearing works already in 2021, the intention is to fill them and cover them with black earth.