Traffic loads are possible on roads during Namejs 2018 / Article / LSM.LV

On Friday 24 August and in the coming days, the beginning of the active phase of the military training "Namejs 2018", temporary traffic congestion is possible on provincial roads everywhere in Latvia, the Ministry of Defense informed.

The military equipment of both Latvian and Allied troops moves along Latvian roads while training, while military planes and helicopters fly in the air.

The armed forces apologize for the inconvenience and ask for a good understanding of the possible transient obstacles that may occur during the relocation of military equipment.

The army calls on the population to understand the movements of soldiers and military equipment and not to obstruct them.

Columns for military equipment are accompanied by the military police, the state police or the coordination center for movement.

The armed forces are encouraging drivers to adhere to the traffic rules and not to interfere with the movement of the columns, such as trying to overtake while the military-technical column is approaching.

The armed forces emphasize that flights of military aircraft in the US airspace are only carried out at the height and speed prescribed by legal provisions, and that the generated noise is therefore temporary and does not damage people and property.

Citizens are encouraged not to worry, given the movement of soldiers and guards outside the military landfills and the deployment of units, the expansion of machines and other equipment and the assumption of positions in different places in Latvia.

However, the army points out that learning ammunition, if there is one, should not be touched. Areas are then cleaned. 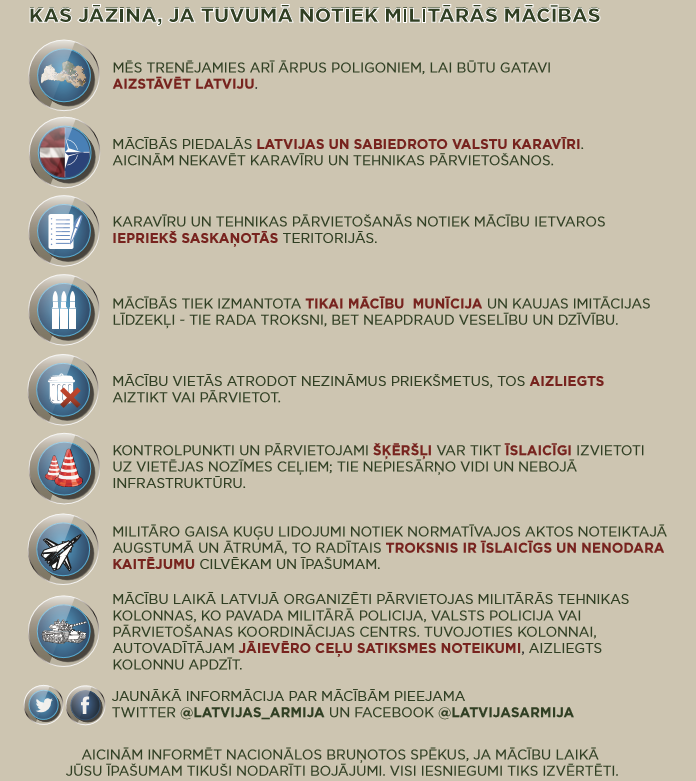 As far as possible, operational information is available on the Twitter profile of the army @Latvijas_armija.

From 20 to 2 September, the largest military training "Namejs 2018" was conducted in Latvia to test and improve the readiness of national armed forces to meet the tasks of state defense in both independent and collective defense systems. .