lebanon December 5, 2020 lebanon Comments Off on Maximus brings life to a popular restaurant devastated by the Beirut explosion 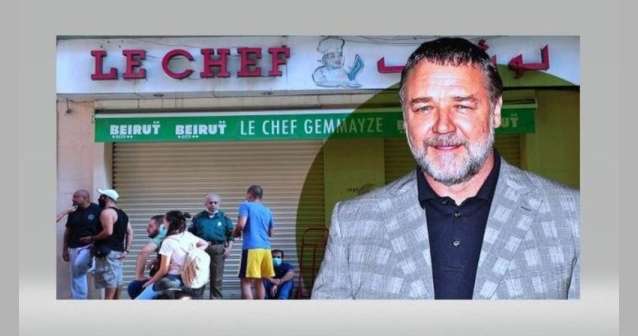 One of the most famous restaurants in Lebanon and the Middle East, it arose from the debris of the devastation it suffered from the explosion of the port of Beirut, and the dust from the debris cleared it up and came back to life thanks to a sudden donation of those who had not visited Lebanon who had never heard of a restaurant in his life where he was originally called Le Chef, and he is the actor and producer Russell Crowe, who we have known in 16 famous Hollywood movies and others, including Galdiator , in which he played the role of wrestler “Maximus” and won five international awards, the main one being the Oscar.

The restaurant is popular and small, so cheap in price that it is possible to have a full lunch or dinner in it for a price not to exceed $ 7, and the owner Francois Bassil opened it in 1967 in the tourist district “Gemmayzeh”, according to what I “knew” about “Al Arabiya.net” from what is said about it. “Online” with a number of local media outlets, some of which report that the famous restaurant among Lebanese at all levels has witnessed many events over the course of 53 years that have withstood their dangers, but the doors have remained open even during the 15 years of civil war.

However, “Le Chef” did not survive the explosion of 2,750 tons of “ammonium nitrate” in the port on 4 August. The explosion destroyed most of it and paralyzed it from the ground, devastating a residential and commercial area 8 kilometers in diameter from the Lebanese capital, so attacked the owners of “Le Chef” and drug addicts. In the video presented, Charbel Bassil, son of the late founder of the restaurant, talks about its history and the variety of dishes.

Bassil, who was born two years after the opening of the restaurant known for its “homey” cuisine, was hit in the head and legs when the explosion occurred. However, two of the restaurant’s employees were taken to hospital, one of them is still recovering, while the second has returned to service after the restaurant opened this week, thanks to a campaign that raised $ 17,800, of which 5,000 came from actor Russell Crowe.

Also in honor of the suicide friend

Crowe, who was aware of the plight of the restaurant of two Lebanese living in New York, also took part in the donation campaign and learned from what he wrote that his friend, American journalist Anthony Bourdain, known for his investigative trips through restaurants around the world, visited the Beirut restaurant and dined there, then talked about him and his ‘delicious dishes’. In one of his documentaries about kitchens and cuisine.

Because the New Zealand actor, who was born 56 years ago, was influenced by what he learned from the Lebanese and their donation campaign, he rushed and donated to help save the restaurant, which was supposed to reduce the number of employees from 16 to nearly half as his donation was in honor of the friend who read ‘Al Arabiya.net’ in his biography. That he committed suicide two years ago by hanging himself in a hotel room where he was a guest near the town of Colmar in the far north-east of France, without leaving a message explaining why he was carrying him to his last resting place.