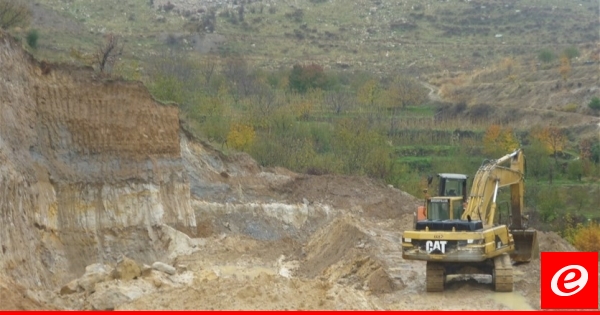 Al-Akhbar discovered that the new excavation works in Al-Hoshab, Al-Suaysa and Krum Arab are being carried out according to a reference from the Ministry of the Interior and Municipalities, allowing the land to be recovered in its grade. However, the transfer of about 700 thousand tons, after the contractor SO To get a reference that allows him to transfer dust for a month from the area of ​​slavery, and followed by a second reference of seven months. It is noteworthy that in the two cases the quantities to be removed or the destination of the transfer are not mentioned, in a clear attempt to circumvent the law to move deals, although this area is characterized by easy ground digging and filling as a basalt type that is known as billion.

Sources near the & # 39; news & # 39; that about 200 trucks cross the road from slavery Sheikh Ayyash and the international road to the coast to Shakka. Private roads were constructed to facilitate the passage of lorries crossing the towns of the Akkar valley, each with a capacity of 50 tons. In other words, the equivalent of 10,000 tonnes of dust is transported daily from the Shirmirin site, as well as large trucks with a capacity of more than 50 tonnes. According to a simple calculation, approximately one million cubic meters are withdrawn from Akkar to a six-month complaint. "

And stressed that "the drilling has not stopped at all, but that the site has changed after exposing things in the media, so the suction of dust goes through and to your eye, dealer," declaring that the "garbage companies" a dollar and Pay half a dollar per ton only, The price of truckload is not higher than $ 80, while companies make fantastic profits, "claiming that" mountains of dust are already in the complaints. "