A family that was presumably slaughtered during the Lebanese war appears 43 years later by supporting Facebook. 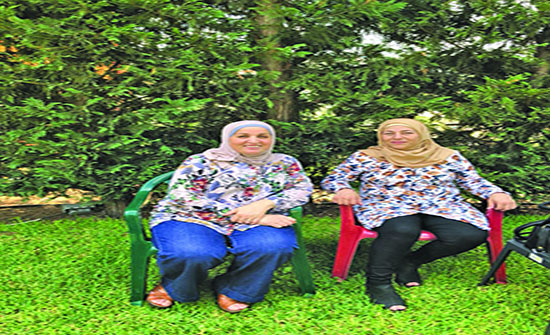 Zainab with her cousin Sarah

28 years have passed since the end of the civil war in Lebanon, but the horrible files are not closed at all, especially the files of the kidnapped and the missing, and the case of the missing has rarely been as happy as that of the family of Muhsin. Abdul-Hussein Reza.

Forty-three years after the family believed that her daughter Samira, who married in 1975 (the date of the outbreak of the war), came from Syria, Izzat al-Hilu (a Lebanese citizen), she had five children and a single daughter. Time under the control of the falangists, along with dozens of other families, shows today that the family is still alive, thanks to the social media «Facebook».

"A story closer to fiction," said former judge Jamal Hilou to Al-Hayat. Is the story of his wife's sister: "If you did not come to me personally, I did not believe it by anyone."

Helou remembers the memory of his marriage to Zeinab Mohsen Abdel-Hussein Rida in 1983. The mother of the woman asked her why she told him that Sara had died as a child as a result of the illness and that Samira was at the beginning of the civil war with her family had been killed.

"In 1977, when the war ended a year in Lebanon, the Samira family went from West Beirut to East Beirut via barricades along the lines and moved to Siddh al-Boushriya district to check if Samira or one of her children would survived Or actually died in the bloodbath one day known for its blood in Lebanon and called it "Black Saturday." The family met people in the area and asked their daughter and they were told that everyone in the neighborhood was slaughtered. family returned to Beirut, which in turn replaced Khandak al-Gumiq, who changed contact lines during the war and left all its inhabitants behind.

Years have passed from war to peace. The mother of Zainab and Samira died in 2014 and Zainab has nine brothers, two men and two sisters. In 2016, Zeinab's former husband, Helou, opened a Facebook account and said he had "contact with friends and family members of the Helou family." Two young men from the Al-Hilu, Hossam and Samy family communicated to him separately, without prior knowledge, he described them as polite. The former Judge Helou, when he looked at one of them on the site, was surprised by the resemblance between his son Mohammed and this young man named Hussam.His wife Zaynab did not share the issue of communicating with Facebook, but drew a resemblance between her son and the young man with whom her husband communicated, but the issue, as Zaynab said, did not motivate her "and no time to link the issue to her sister's question, That Samira was killed and her family, if the family did not document the murder or even the existence of bodies, which led to the failure to establish death in the registers of the state, "said the former r however Helou: "The war machine killed people and there are no telephones and transport. No electricity, no one asks for papers or cares about the possession of papers. The shot was higher than anything else. "

"More than a month ago Mohammed married my son and published his photo on my electronic account.Hossam El Helou congratulated her and during the conversation he told me that his mother is Lebanese and that his father is a Syrian, but he has the Lebanese identity during the process of naturalization in earlier stages, I asked him where she was from your mother and he told me from the south of Lebanon and he did not tell me the city and I asked him about her family and she called me the family of my wife Zainab, I asked him about her father's name and said: Mohsen ».

"This was where the shivers started in my veins and my wife Zainab sat next to me and asked me what was wrong with you, I did not answer, I thought for a moment that someone was cursing me, or that what I heard was a dream, and my questions went on and he said to me: "Why do you ask me for a consultation?" "What did you do?" Samira Abdel-Raza, born June 3, 1941, "left him a little and released the family record that belongs to my wife and the information matched and asked him the identity of his old mother as he was Property of Vohadha and similar between Zaynab and Samira indescribable.and sent him to close the family record of my wife and read the name of Samira, which qualifies for Izzat, and asked if he could call me by telephone because he can no longer write. »

Judge Helou added that in the meantime he looked at his wife and looked as if she were about to faint. Zaynab said: "I no longer own myself, is it possible to find my sister's children after 43 years, but where Samira, my mother died and the heart in her heart, I tell my brothers?" It was an indescribable moment : blood was running through my veins and I was almost unconscious. & # 39;

"I have not understood anything," said old right hand Helou. "When he called Husam, he was confused." I did not understand anything. "Although he had read the name of his mother to take the restriction she showed him, he said:" What does that mean? "Your aunt's husband who is next to me spoke with her", "moments of crying and shouting and joy and sorrow".

Helou points out that he has brought the family home. Samira died in the same week that her mother died in 2014. She spent her life looking for her family.

Husam al-Hilu said that his family, when they were in the Bouchrieh district, had a neighbor from al-Zu & # 39; aitar, from the Baalbek-Hermel region, he had a good relationship with the Phalange party and one of the gunmen told him to leave the area before nightfall because a massacre would take place here and all Muslims in the neighborhood would be killed. , Gathered his family and owned a truck and told his neighbor Izzat Helou to go with him. "We collected our stuff and the truck took us on the coastal road to the north.Our family came down in Tripoli and Zu & # 39; aiter completed his journey eastward, to Baalbeck.We have moved to the border crossing Arida with Syria and are going to Tartous and then went to Homs and lived for years with my father's parents ».

In the meantime, the inhabitants of Samira were displaced from the neighborhood of the gully in the direction of al-Sanaa district in Ras Beirut away from the seam lines, and it was difficult for Samira and her children to follow the place where the people moved, especially because people in the ditch of the clouds informed them that the people of Samira may have been killed by shelling, outside Lebanon. The residents of the ditch changed and others replaced them.Houses and buildings were demolished.After the war the entire area was swept away and the reconstruction project in the center of Beirut was completed. And lost every track.

"So when Samira's children after her death went to ask the family of their mother in her southern village, after they found out that they all had a family name in the southern city of Beifleh, The family did not ask the children for a unique family, they did not notice that their mother had been removed from a comment about correcting the surname.

Ironically, according to Zeinab and her husband Jamal Helou, Zainab has a brother who lives in Germany and shows that her sister Samira also has a son in Germany and in the same city, a street of his uncle's house.

Zainab says she stayed for three days. "I was shocked, my brothers also suffered the same shock: on the day that they all came to my house, we found a similar agreement between their children and our children, and we found out that my sister Samira has given birth to a second daughter and to our deceased sister Sarah named, it was sad that my mother did not realize that her daughter was alive and my sister Samira died and was part of her family in her heart. & # 39;

Estimates of the families of the abducted and missing persons who for decades have insisted on keeping their case alive, that the number of about 17 thousand was kidnapped and missing, and when this story was handed over to the chairman of the Committee of the Families of the kidnapped and missing in Lebanon »Andad Halawani stunned and said: Parents". "One of the mothers found her lost son in the eighties from the path of the neighbors, but he lost his reason. We have not recorded the situation and we did not document similar cases during that time, "Halwani recalled.

She notes that "many of the victims of the war have their story at the end of the war, and no one documented it and did not check its reality." The people did not note what happened to them because of the lack of awareness of the importance of documentation. If we have not documented our kidnappers and missing people, their cause would have disappeared. & # 39;

"The war ended more than 28 years ago and the fate of the missing and the hidden is still unknown." Since the abduction took place, our lives have changed, we are just waiting, the state of doubt and waiting will only be treated with certainty. is our right to know the fate of our two sons, this is a non-negotiable right. & # 39;