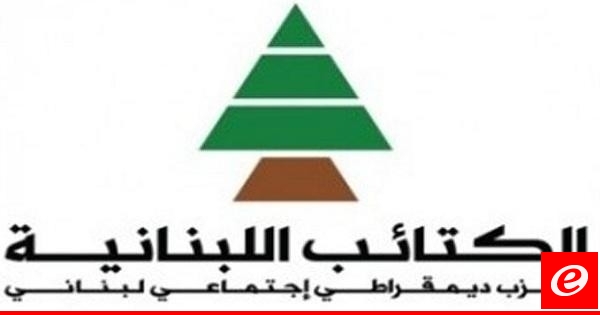 The political office of the Phalange Party of Lebanon declared that "the power struggle of power" continues to "plummet" quotas, gains and power divides and try to reach the country through its balance, Bazara, forgetting in the game of his interests, the interests of the Lebanese and delusions, and the uncertainty about what the situation in the country, sunk in open crises, warns that the worst, and does not rise or feel that the duty to move to confront them, "noting that "these indicators made" Battalions "are of the opinion that there is no real intention to correct warping, through solid national balances based on a bailout program" It is clear for the government, taking into account the seriousness of the political , economic, living and upbringing conditions, and political forces decide whether they agree to participate in the government or to stay outside. "

"In light of this reality, the Phalange party confirms that there is no solution but to accelerate the formation of a government of skilled specialists who is capable of taking serious and radical measures, backed by a strong decision to save me avoid the total collapse, not long if it remains as it is. "

"The Phalange party, which has always warned of the dangers of surviving displaced persons in Lebanon, emphasizes the highest priority for their return to their country.The international initiatives, especially the Russian initiative, are a fundamental guarantee for this return, since the Russian mediator is able to influence the Syrian regime, especially because Moscow had already expressed its willingness during the visit of the Phalange leader in October, and today the Russian willingness for an international resolution has changed after the Helsinki Summit. "

He pointed out that "the need to adhere to the policy of neutrality, and warns of the risk of interference in the affairs of others, which has serious consequences for Lebanon and its children abroad."

On the other hand, the Political Office pointed out that "the range of beating freedom of opinion and thinking has reached an unprecedented level, in the light of the persistence in adopting the policy of intimidation and encouragement, how many mouths and oppression of freedom, "categorically rejects any violation of freedom of opinion and expression, guaranteed by the constitution and protected by a free democratic system that respects opinion and other opinions, and calls for vigilance and vigilance and confronts with practices that people daily towing without being justified. "

He stressed that "on the 36th anniversary of the election of Bashir Gemayel as President of the Republic, the Phalange Party confirms that no surrender and no compromise on the construction of a strong state, free and independent, free from corruption, painted by the martyr-president in twenty-one days, Lebanese people to continue to build the land they dreamed of with their Lebanese project. "

The party congratulated "the Lebanese people in general and Muslims, especially by Eid al-Adha, asking God to restore it to everyone with goodness and calm and peace of mind." Lebanon has fully and unabashedly regained its sovereignty and ended the crises it suffers. "