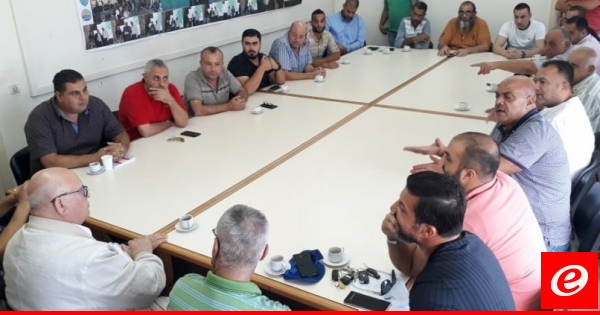 "The purpose of our meeting is to discuss the installation of the meters," said Saida Mayor Mohammed al-Saudi, after a meeting in the building of the municipal palace with generators in Sidon. The Ministry of Energy and Water set the time at the end of September to install meters for all participants on different Lebanese territories.

He pointed out that "I have learned from the owners of generators that they have observations and problems to install meters, that buildings can not be installed meters, in addition to some of the participants have installed meters, and that there was a rejection of each other. The generators have also asked the Department of Energy to install meters for those who wish it from subscribers, and there is disagreement about the price of kilowatt meter meters. "

"The producers' owners have asked them to wait for what the negotiations between them and the Ministry of Energy will end, where they will make an appointment with the Minister of Energy on Thursday to discuss all these issues," pointing out that "accordingly a meeting with the generators in Sidon at At two o'clock in the afternoon on Friday afternoon in the municipality of Saida, especially that the period for the installation of meters has become very close," focused on "we have to reach a solution to not to reach the stage where we lose the service of generators, or there is a problem with the installation of meters. "

He also expressed his amazement "when one of the owners of the generators told him that the latter installed about 165 counters for subscribers and later the installation of 100 meters by the owners would return because of the high bill," noting that "the electricity in Saida began to improve Compared with the past few months, but did not reach the required degree, "claim that" the hours of power outages in Sidon more than other areas, and the reason according to the utility of electricity that is distributed according to production capacity in Lebanon. "