The exclusion of "8 March" from the government and the marginalization of the Miqati block is another thing. 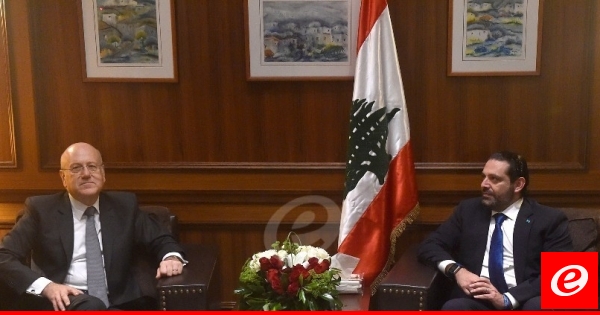 In the House of Representatives, which resulted in the elections of May 10, the deputies belong to the Sunni community and do not hear or support or support the future movement. Najib Miqati, Faysal Karami, Jihad Samad, Adnan Tripoli Y, Fouad Makhzoumi, Walid Sukareya, Abdel Rahim Mourad, Asama Saad, Qassem Hashim and Bilal Abdullah. In the beginning, many attempts were made to collect them in a single parliamentary block that would lead the Prime Minister and take a share in the government, but these attempts failed. Because they did not agree to form a parliamentary bloc themselves, they were divided into the blocks of loyalty to the resistance, the national bloc, the democratic encounter and the independent block of intent.Hariri is more at ease with their not representation in government. To the president of the republic, General Michel Aoun, to be exchanged for a Christian seat.

If it is easy for Hariri to deal with the demands of Sunni MPs who are part of parliamentary blocks or parties to the parties (Qassem Hashim, Alwaleed Sukkaria, Bilal Abdullah, Faisal Karami and Jihad Samad) without seriousness and indifference, and if it It is easier for him to ignore members of parliament who have to each block (Adnan Trabelsi, Osama Saad, Fouad Makhzoumi and Abdel Rahim Murad) The question posed in the scenes, how will Hariri, who won only with a parliamentary bloc of four deputies, ignore?

In his interviews and media interviews Hariri ignores the speech about the representation of Miqati & # 39; s block, but it is ultimately a block with four members. If left outside the government, this will reflect its popular base in the northern capital Tripoli.Mariq will invest more and more in the stadium Northern elections. Initially Miqati, the only Sunni member of his four-party block, would have met with Maronite MP Jean Obaid, the orthodox parliament member Nicolas Nahhas and MP Ali Darwish, who demanded that Hariri get a Sunni minister and Tripoli in the next government. Information quickly proved to be inaccurate. According to the Motion of Determination, Miqati Hariri did not impose any conditions that could be difficult for his task, not for the sect or doctrine of the ministerial seat, nor for the type and size of the bag, but for the nominated minister president, all to facilitate and not hinder the task of authorship. "Our options are open and we are a sectarian, first we are with Tuzir Obaid, the second with Tuzir Nahas, and thirdly, when the chair is sunni," he told Hariri. "In the context of his meeting with Hariri in the non-binding parliamentary talks in the Lower House after his appointment, Khaldoun al-Sharif will represent us."

For all of the above, Miqati does not accept in any way, for whatever reason, that the representation of his block in the government of Saad Hariri is overlooked, especially because he has not made other conditions as impossible and the ceiling of his requirements has not increased, nor the range of chair that will represent him and his doctrine. Under sovereign or service portfolio & # 39; s.

In the end, if Hariri insists on removing the Miqati block from the government, but in the time of the proportional electoral law and after the results achieved by the last in Tripoli, it will be easy for him to understand the consequences of this exclusion. Traboulsia to carry?