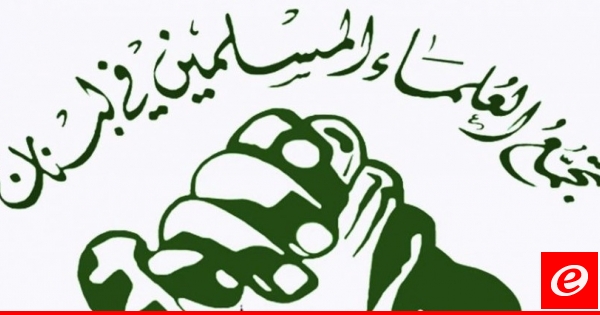 The & # 39; Muslim Scholars Gathering & # 39; pointed out that & # 39; Eid al-Adha becomes extremely important this year, it came after years of Jihad against the Israeli occupier and Takfiri terror. The men of Allah obeyed God's commands and responded to his call and hastened to defend religion, "He stressed that" today Lebanon is safe, not only thanks to the international community, international arrogance and international organizations, but also because of the resistance of the honorable resistance fighters, who only have this holiday, The sacrifices are still signed Until today. "

He explained in a letter to the Lebanese on the occasion of Eid al-Adha that you have to sleep at home and go to sleep on the day of Eid, have fun with your children to visit the family or go to restaurants and amusement parks while you stand on the fronts in the face of Zionist terrorism and hatred. Tkfiri men lent their skulls to God and settled in the ground Their feet and they must not allow themselves to disturb the enemy on the eve of your feast, they have many thanks from us and God is abundant. "

"The meanings of Eid al-Adha are many, and perhaps the most prominent title, what the name of this feast means, the sacrifice of the most valuable of what we have to comply with the commandment of God. to sacrifice Ishmael in obedience to God's command to kill him, We have obedience to the commandment of God, "emphasizing", when the devil submitted us to this compliance, we stoned him with moral stones, as Abraham blunted him with physical stones that expressed his rejection of his Luke, and declare that our ears and our minds are deaf to listen to his sedition, do not grow up and engage in non-aggression Our people, but remember that our enemy is the only enemy The Zionist ".

He stressed that "the most prominent title of the hajj after sacrifice is the innocence of the enemies of God and the lack of affection and the declaration of war against them, and the authorities based on the pilgrimage to prevent the march of innocence as opposed to the rituals of worship, while we believe that the most prominent pilgrimage to the hajj is the declaration of innocence ", to note that" This ad is what gives the hajj the true value for which the law of God is prescribed, but what do we do with people who are associated with the mushrikeen and have gone into their jobs and are loyal to them? "

The demonstration concentrated on "I do not forget when we talk about the feast and the sacrifice, Palestine is not a feast for us and occupies Palestine, nor a feast for us and Jerusalem desecrated by the Zionists, nor our feast and the machine of Destruction of Zionism kills daily young men, women, children and old people of Palestine The real day that we return to Palestine gave it and its people joy and Muslims Azzthm liberation from the occupation, and this is only possible through the sacrifice of the precious and noble and innocent of the unbelievers and enemies of mankind.

"At Eid al-Adha, we say to our people in Lebanon that we and you in one boat will survive together or sink together, so not every team tries to act in the boat, regardless of the importance of the other team And this can only be national unity and come from rhetoric and sectarian and sectarian calls, and accelerate the formation of a government of national unity that works to solve the problems of the country. "

He stressed that "Islam is the religion of grace, sacrifice and love, not the religion of murder, but that jihad is imposed on us by those who fight us and do not attack and harm us, and do not preserve our will and independence and do not dominate Islam is a universal call to connect the human creator We want to open God's heart to faith through our calling, because it is equal to us in creation and because all people are God's children and love them Allah has given His servants . "