"Oxygen" – a tribute to the town of Šiauliai "

A new work of art – a sculpture "Oxygen" made by Gintautas Lukošaitis – was found on Salduvė Hill Hill, yesterday based on Šiauliai. As the sculptor himself says, it is a tribute to the town of Šiauliai. This is a return to the identity of our country, the expression of what is important to him is characteristic.

Tried to reveal the identity of Šiauliai
"For a long time I thought that the city paid little attention to its identity, because it is very important to have certain city features, activities, signs, commemoration of history, people." "Yesterday, jet fighters came above us, which is a sign that we are not a city, there are more signs, such as an airport, a NATO base or a café, only the city does not take what is cut down on the ground ", – G. Lukošaitis unveiled the idea of ​​sculpture for" Šiaulių naujienos " .

It is difficult for a sculptor to explain why this happens, but in his opinion it is good that artists can participate in plenary meetings. Here the current sculptural ploner "No / Discover Siauliai" does not put a lot of money into creating artistic accents of the city, but one can expect to achieve a good result.

On the other hand, if there are no new ideas – participation in the plenary is not the best idea. The interlocutor revealed that he himself considered refusing to participate, because he initially did not know exactly what his job would say.

"At first I was just thinking about helping, and then I saw that a Russian was doing something like that, I did not want to repeat it." Indeed, it was hard for me to come up with something, and until the final idea was formed, it was long to succeed, "said Lukošaitis.

"Oxygen" has a broad symbolic meaning
Finally, the artist realized that Leonardo da Vinci was depicted by a naked man, an Antarctic warrior with a helmet – with a flying helmet – that would be what he needed. The sculptor of the Nuogo pilot fits perfectly with the motif of the flight. This makes it painted blue and looks beautiful on the background of the sky.

Because the author made the sculpture of a soft material, he made it within a month and a half and gave the name "Oxygen". According to Šiauliai, this name has a broad symbolic meaning, because oxygen is invisible and the most important element.

Now the statue is in the Saldus valley. It is true that the chosen place is not coincidental, it is special, with its own history. About forty years ago the largest monument in Lithuania was built here – three ten-meter high soldiers clashed with their backs. The monument was copied from a wooden monument that was meaningful for the battle for the sun, whose idea was originally written by the father of G. Lukosaitis – sculptor Vitalijus Lukošaitis. But now about these soldiers there is only a memory – only the basis. A three-meter high iron warrior, covered with a flying helmet, should brighten up that place.

It is important to mention that this object will only stand on this spot until the foundation has been destroyed. As a result, G. Lukosaitis does not survive: "Four sculptors can build all areas of the city, with bronze tiles, within five years, but worse for people, now the sculpture will fall into disrepair for two years, and the city will not suffering, because nothing is invested here, only kopecks, which is zero compared to the city budget, and in addition, a well-changing process is good.

Scarves do not need bronze and gold sculptures
The sculptor said about the sculptural negative feedback from Siauliai that has not yet been received: "Normal reactions, you will not be surprised, people have traveled a lot, many have seen, there is no reason to surprise, it is just a bat."

According to him, the main concern is not to shock an ordinary citizen, but to bring artistic accents to a more general level in the city: "It's enough for those prizes, poor folktales." Presenting a catastrophe in the park the one has cut two in it, presents such sculptures and envelops the environment you do not even want to go there, for example I do not want to go there. "

The sculptor is pleased that the artists are now trying to create interesting artistic accents through the square air that takes place in Šiauliai. He especially likes the work of my colleague Donatas Jankauskas, who … floats in Talkša Lake. According to M.C. Čiurlionis is created "peace", but it will be called "Nerimu". It will be a rock out of the water, resembling the shape of a gorilla head and the light of the nostrils of the "gorilla". "This is really an impressive work by a colleague", – G. Lukosaitis praised his colleague.

Coming back to the theme of the plein air, the sculptor stated that "oxygen" has no material value, because it is made of cheap material such as plastic. If the sculpture were cut from gold or bronze – it would have a greater material value. But he said he was not afraid that the image was made of such expensive materials. According to the artist, no one has more granite, bronze sculptures. Here is the official opening of Freedom Warrior in Kaunas – the Vytis sculpture is already a fulfilled dream.

"Everything is thrown in there – what is needed and what is not necessary, for me as a sculptor this is not a piece of art, there is a Russian dracula and I think people will be happy," said the interlocutor.

In his opinion Šiauliai would not have to comply with Kaunas' example, unless only one would decide not to work on horseback, but to make a nice horse.

Not going to participate in competitions
The sculptor is not really planning to do something similar in Siauliai. The artistic accents are not intended to decorate the renewal of the spaces in the city center.

"New rooms will not let me down." I immediately said that I would not be attending any contest, I know the town for 200 thousand, the euro is being allocated, but I'm not interested, I wish there would not be any poor, everything could spoil the thing, but something decent, "Lukošaitis said.

He urged all his colleagues to create something beautiful for Šiauliai, but the problem is that usually the best artists do not participate in such competitions.

"I would like to have fair competition this time, I invite as many people as possible to participate in quality, I will not hide, the money is good. build and then leave for Turkey to leave, I hope that at least a normal picture will be made for this money, at least I wish the city, "the sculptor waited.

When asked what my sculptures in the city are, I replied that there are no images at all in Siauliai. It is partly good enough that they have not brought much of their city. On the other hand, in the southern region you could have an interesting artistic accent – even on the roofs of the house.

The sculptor himself thinks of the rabbis to make a monument: "As you know, the rabbis are recovering, maybe I will take such propaganda again and the monument will be in the stadium." Let people have a place to take pictures. " to make. "

He admits that sculptural craftsmanship gradually disappears, but has not completely disappeared. There are still people who are developing and our city will be set up in the future. 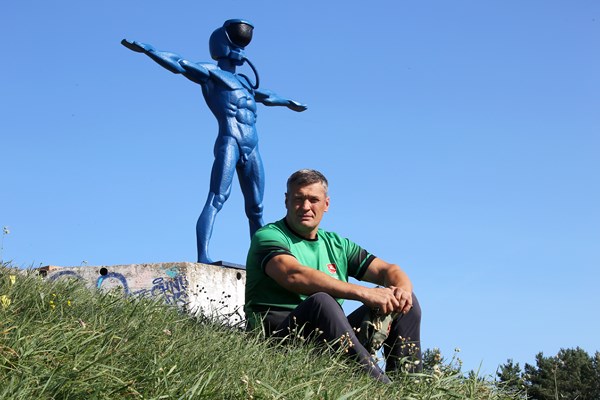