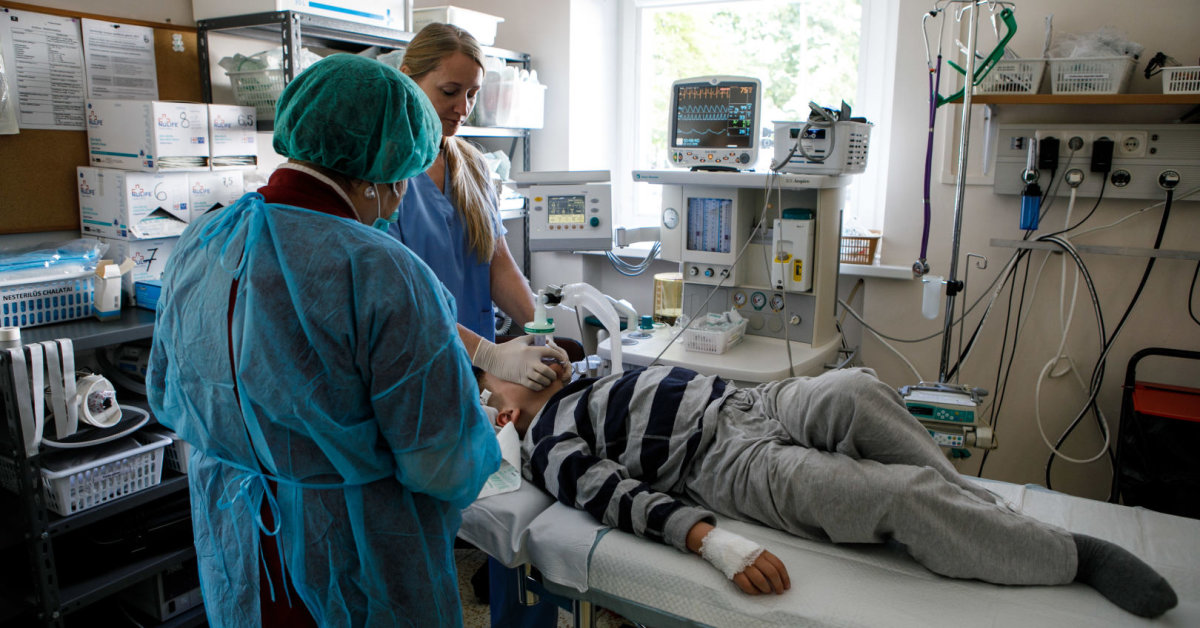 Linus Petrauskas will be 10 years old in September. He is the middle child of Gytis Petrauskas, a resident of Kaunas. The other two did not recognize the symptoms of this terrible disease. It was Lin on Thursday that a new treatment procedure was carried out in Kaunas clinics. 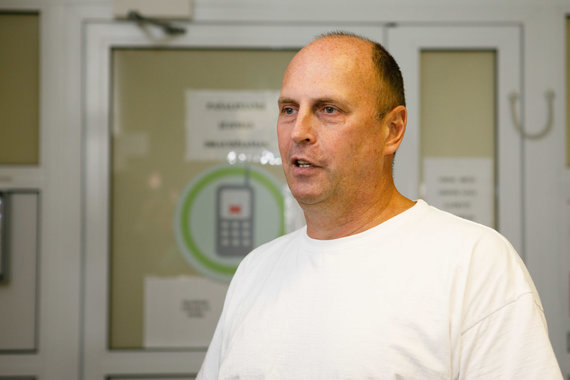 "Lina was born healthy, he was already up, when he was angry, we felt his muscles were weakening, I was looking for a sneaker Exercise did not help sports A genetic test brought a disease to light The day we heard the diagnosis was not really fun.The child was able to do everything except what is related to muscle functions ", G.Petrauskas started telling the story.

According to him, the son's disease has progressed – the muscles are constantly stabbing. The boy simply did not walk, he could not lift heavy weights. Attending a school for general education, however, was the leader.

"We are very enthusiastic about the appearance of medicines, they are wonders for us, other Baltic countries do not receive this medicine, we did not expect to reach Lithuania too quickly, there were thoughts that were already going to England, Sweden or Germany. Settle, wait for the drug to arrive, but Lithuania got it in. The Kaunas Clinic team has made efforts.

We hope that the son will return to normal life. We are already seeing progress, two weeks after the first procedure, – the muscles become stronger, the movements of the son are rushing. For example, to raise his hand, the child had to make extra movements and now he raises his arm and quickly wraps himself in, "said G.Petrauskas, reassured that he had never met his son's illness, waiting for the invention of medicines.

The rise of medicines has motivated Lin extra. The child wanted to do exercises and dream of becoming a doctor in the future.

Spinal muscular atrophy is one of the more frequent rare diseases. It is determined by one in ten thousand newborns. It is a serious debilitating and progressive disease, the first signs of which are already visible in the first year of life. Spinal muscular atrophy was also diagnosed with Justas Džiugelis, a member of the Seimas of the Republic of Lithuania.

Children with severe type 1, spinal muscular atrophy often die in childhood. Patients with a second type of illness then become adults. They have a high level of intelligence, but due to a progressive disease they completely lose their ability to move, they need breath support.

The new drug, even in the medical community equivalent to a miracle, allows you to stop the progression of the disease and prevent complex complications.

Even experts with a great experience do not hide emotions: on the one hand they have worked on many different treatments for many years, on the other hand it is hard to believe with their eyes when a child who does not have to hold his head does not sit down , starts walking or walking a bicycle.

"The disease, which has been considered completely desperate for many years and whose diagnosis did not provide any reassuring knowledge for the family, has been treated in recent years," said Milda Dambrauskienė, a physician at Kaunas clinics, about a fundamental change in concept of spinal muscular atrophy. 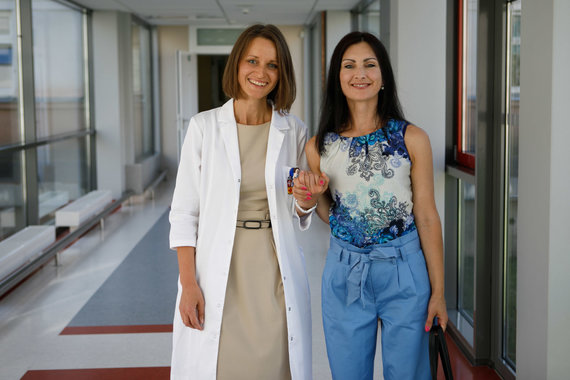 According to her, the symbolic coincidence is that the first drug injection was made in August – when the whole world points to spinal muscular atrophy.

A total of 11 children will be treated in Lithuania. Eight of them are in the center of the Nervous and Muscular Diseases of Kaunas Clinics.

The treatment will be 11 children

A total of 11 children will be treated in Lithuania. Eight of them are in the center of the Nervous and Muscular Diseases of Kaunas Clinics. Even before the possibility of genetic treatment of the disease emerged, children came annually for extensive research and expert guidance, as well as for rehabilitation, because it is important for a patient to progressively diagnose respiratory failure, heart complications, bones, joints and other systems, leading to a deterioration in quality of life and duration.

"The drug is released into the brain fluid by lumbar puncture, the technical features of the procedure are revealed by the head of the pediatric intensive care unit, associate professor Vaidotas Gurskis.-Children whose spine is severely distorted by progressive muscle weakness, which work for this reason, even a simple procedure becomes a real test, but we have all the necessary tools and a team of professionals who are well versed in this task. "

The youngest patient at Kaunas Clinics, who is being treated with an innovative method, is currently nine months old. The urgent concentration of neurology and the efforts of geneticists at Kaunas clinics have been diagnosed in just eight weeks, just a few days after the first referral to doctors.

According to Professor Milda Endziniene, head of the Center for Rare and Non-Diagnostic Disease Coordination Center at Kaunas Clinics, Professor Milda Endzinienė, Neurology Clinic, is promoting the right secondary neurological response by the patient to the Center for Nervous System and Muscle Disease in Kaunas Clinics to send. This proves how important it is that physicians of different specialisms working in different health care institutions have basic knowledge and rare diseases. 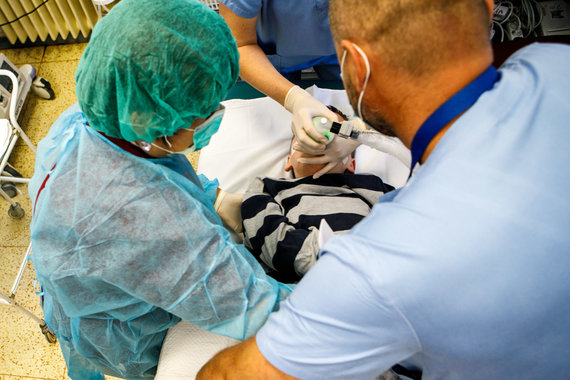 The first injections were given to six children

When the medicine was registered in the European Union, the doctors turned to the Commission for expenditure on the treatment of very rare human health. In July this year a positive decision was taken, gathered around the efforts of specialists, patients and the competent Lithuanian health authorities.

In addition to the six teenagers who have just received the first dose, treatment in Lithuania will continue for two younger children with the first type of atrophy of the spine, which has been injected in Belgium so far. The results these children have achieved during the year confirm the effectiveness of the treatment and motivate them to work with older patients.

Some families have been waiting for treatment for almost 15 years, which is not only a miracle, but also a result of great trust, patience and work.

"Some families have been waiting for treatment for almost 15 years, and this is not just a miracle, it is a result of great faith, patience and work, which was the result of a great collaboration between specialists from different fields. feeling excited during the first procedure.Every excited detail was softened with great excitement: from the placement of the child to the discharge from the hospital, not to mention the same procedure when we received calming words and support from the regular doctors together "said Kristina Antanavičienė, associate of the Association of Genetic Nervous Musculoskeletal Disorders in Lithuania," Sroonia "The President.

Short about the disease

Spinal muscle atrophy is detected in 1 in 10,000 newborns. This is the most common cause of genetic infant mortality.

The disease is inherited by an autosomal recessive method. One in 40 people is the carrier of a damaged gene. When two carriers come together, the chance of a child with a child reaches 25%.

Spinal muscle atrophy causes physical limitations because it affects motor neurons in the spinal cord. These cells send impulses from the brain to the muscles through the peripheral nerves. When they disappear, a person loses the chance to walk, eat and breathe later.

Spinal muscular atrophy is determined by the mutation in the fifth chromosome of one genome, the so-called motor neuron survival gene. In a healthy human body, this gene is responsible for producing the protein needed for muscle-controlled neurons. When this protein is missing, nerve cells can not function properly and die. This causes muscle weakness and loss. In most cases people die with this disease due to complications of the respiratory system.

From 2017 The first drug for the treatment of spinal muscular atrophy registered in the spring of the European Union is depression. It is one of the most expensive medicines in the world. At the moment this treatment method is compensated by 24 European countries, who in turn have made agreements with the company that makes medicines.