Although there are theoretical ways to destroy or redirect an asteroid traveling to Earth, they are not valid for bodies larger than 500 meters in diameter. This is what Rüdiger Jehn says, according to the Earth Defense Threat Missions of the European Space Agency (ESA). 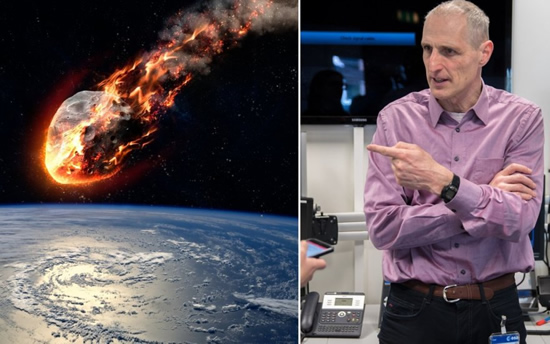 "If all humanity were in danger, if all space agencies united several times and rockets and spacecraft rockets, I think it is possible to cover a larger asteroid. Still, I think the limit is still there. If the asteroid is huge, there are no ways to do that, "says the scientist.

We spoke with Mr Jeha at his workplace in the European Space Operations Center in Darmstadt (Germany).

– Which authorities are on the ESA list of potentially dangerous asteroids?

– There are currently 836 asteroids in our "risk list". Here are the bodies that are more likely to meet the earth than 0.

The telescopes we use take a photo of a certain point in the sky four times per hour. Then we look at whether some objects have been moved compared to the stars that are not moving, and that is usually visible in four hours. If we decide that it is an asteroid, we try to keep track of the other functions – what its job, size, and so on.

Of course there are some errors – so the list is decreasing, this is increasing. Sometimes we also incorrectly calculate the size – it appears that the body is not a few hundred meters in diameter, which could destroy the entire state.

– That's hard to say. I would say about 10 km – an asteroid of this size destroyed dinosaurs, but not all life.

– The "risk list" contains very small asteroids – only 12 meters in diameter. Can a body of this size cause real damage?

– Small asteroids do not seem threatening, but the Chelyabinsk asteroid only had a diameter of 20 meters. However, when he fell into a place of residence, there were many injured people, a lot of damage to property and so on. Like after a tornado.

Smaller objects are usually seen when they are very close to the earth. The smaller the asteroid, the closer you find it. Sometimes this only happens a few days before a possible collision. If we discover such an asteroid, we try to investigate it more thoroughly and determine the most accurate collision location. If the asteroid is larger than 40 meters in diameter, we always recommend evacuating the collision site.

– Do scientists and scientific organizations have some sort of action plan to take if the earth is really confronted with a collision with a larger asteroid?

– Every year, scientists meet for a conference to plan how to handle such a case. We try to agree on how we can tell people what measures should be taken, and so on. Because we didn't have such an event in Earth's history, everything is still in theory.

First of all, we would collect as much data as possible about that asteroid. If the chance of a collision is more than 1 percent in the next 50 years, we report to the International Asteroid Warning Network (IAWN). It is a subdivision of the United Nations (UN) with researchers from NASA, ESA, and so on.

If the experts decide that the situation is serious, the asteroid must be determined. If, just like Chelyabinsk, the stone is likely to burst in the Earth's atmosphere. If the asteroid is iron, it is likely to reach the earth. Then you have to determine where the asteroid will run. As I said, it's important to know if the area is densely populated, and so on.

If the asteroid is small, try to destroy it even in space – just too expensive. If it is over 50, UN experts would calculate if it is necessary to plan a mission that would somehow divert the asteroid from Earth. Unfortunately, so far, we only know the theories of routing or asteroids dropped into theory;

The good news is that we have to notice large asteroids early. That is why we should have time for missions that would distract us.

– Two years ago I spoke with my colleague from the European Space Research and Technology Center (ESTEC) – Detlefu Koschny about the theoretical ways to shoot asteroids. He told me that until now there is no theoretical way to destroy or target an asteroid with a diameter of more than 500 m. Is this still true?

– NASA and the European Space Agency are working together on the "Asteroid Impact Mission" (AIM) mission. The goal is to check if it is possible to direct the potentially dangerous celestial body towards the earth in the other direction by using kinetic energy.

However, the spacecraft is very small compared to an asteroid. Something like whether the flies are trying to knock down the car (laughs). So I agree with Mr Koschny that if the asteroid is more than 500 m in diameter, we would not do much.

On the other hand, if all humanity were in danger, if all space agencies united and fired rockets and space travel times into the asteroid, I believe it is possible to cover a larger asteroid. Still I think the limit is still there. If the asteroid is huge, there are no roads yet.

– What are the future ESA plans? Is AIM the only mission that contributes to protecting the earth against asteroids?

– Last year we discovered 19 new asteroids. For comparison: NASA has discovered around 2,000 with its more powerful and newer telescopes. Compare (laughs).

The European Space Agency is currently planning a Flyeye mission to build telescopes capable of constantly tracking the sky and looking for new, potential asteroids that threaten the Earth. Flyeye must detect bodies from a diameter of 40 m for at least three weeks before a potential collision. Flyeye scans the entire air within 48 hours. We should test at the end of the year and the telescope should start working in 2021.