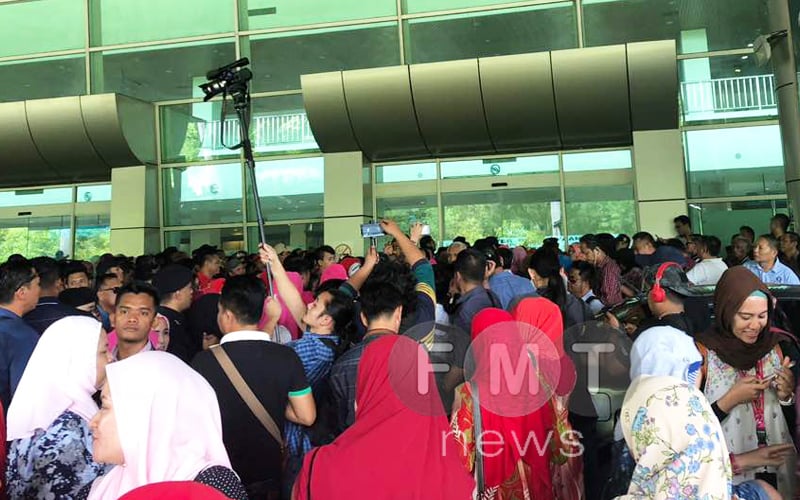 KOTA KINABALU: An elderly woman prayed repeatedly with prayers as she wiped her tears and asked God's grace to protect the former Prime Minister Musa Aman.

"He was a good prime minister, and when he came to the ground in Sandakan, he was never arrogant and always made sure that we were cared for, and I just hope he is treated just as well," she said. while her eyes woke tears again as she spoke.

A heavily pregnant young woman leaned against the black van parked next to the Kota Kinabalu International Airport (KKIA) Terminal Two, obviously exhausted after waiting for Musa's arrival since 11:00.

"I'm on time at any time, but I want to be here to show my support, I do not care what happened, I just want to see Musa again," she smiled.

The women were among more than 3,000 supporters admitted to the Terminal Two compound.

Another 8,000 were allegedly rejected by the police who blocked the area, for fear of the safety of the people if more were allowed inside.

They were followers of Musa, mainly from Umno and others from former Barisan Nasional (BN) parties and Parti Solidariti Tanah Airku (STAR).

These supporters came in their own vehicles while some took buses and taxis to be present at the airport.

As more and more photos of the big turnout found their way into social media, rumors began to circulate that those who came were each paid by Sabah Umno RM150 and that buses were chartered to bring them in.

Those who were on the spot, however, could confirm that this was not so because it was obvious that those who came today did so at their own expense and out of loyalty to Musa.

Musa arrived at 12.30 with a private jet and was greeted by his friends in Gabungan Bersatu Sabah (GBS).

He has been away from the public for almost four months. When he left, the image he left was that of a strong and determined man.

But the man who appeared today was an older man, yet with the same determination in his eyes.

His beard was white and so did some parts of his hair. He walked slowly but surely, assisted by his walking stick, raising his hand to greet his supporters who continued to catch a glimpse of him.

Musa was quickly transported to a waiting black van outside the terminal building towards the legislative building of the Sabah State Assembly.

He was sworn as the Sungai Sibuga collector for Speaker Syed Abas Syed Ali in the Speaker's Chamber today at 3.33 pm.

Political analyst Lee Kuok Tiung told FMT that while Musa returned home finally answered all questions about his whereabouts and the many what-if-ands, he warned that this was just the beginning of a new series of events.

The associate professor of Malaysia Sabah Humanities, Art and Heritage said that this was not something to do with the current administration of the state government under Parti Warisan Sabah.

"But whoever is the rightful prime minister will of course soon be known, the most important thing is that Musa has already been sworn in as a mechanic, I think this is just a start, not the end of the Sabah chief ministership saga.

"This is because earlier Musa's political opponents and their supporters hoped that Musa might not be sworn in as the collector," he said.

He also noted that the large attendance at the airport, despite the late announcement – news of Musa's approaching arrival was made known late last night – showed that Musa still has a large support base among the population.

He believed, however, that Prime Minister Shafie Apdal would not worry about the masses.

"I really think it will only make Shafies supporters more aggressive," he said.

Musa, who left Sabah on May 14 to Kuala Lumpur, left the country two days later to get medical help in London.

He returned to the country on August 21, but was immediately transferred to a private hospital in Subang Jaya for further treatment.

After a criminal intimidating report filed against him, he was arrested on August 23, but the magistrate's court refused police pre-trial detention because Musa was not considered a flight risk.

He will take over the role of opposition leader of STAR President Jeffrey Kitingan at the Sabah Legislative Assembly.